Posted on 27 September 2016 by Steve Prentice 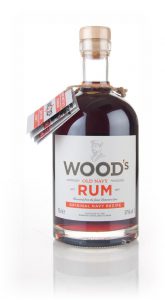 I’m lucky enough to have been involved with a Twitter Tasting, looking at Wood’s Rum… and deconstructing it’s three component parts, tasting them separately before then trying the finished article… not something you get to do every day! Firstly, let’s quickly review what and who Woods are:

“Woods has been around since 1887 and was first created in the docks at Liverpool. Back then it was a company called The Woods Trading Co. who had ships coming in from all over the world. They had barrels of rum coming in on their ships and they seized an opportunity and a trade agreement was set up to import 3 different marques of rum and Woods was born. Woods is unchanged and sticking to our traditions is a key part of what we do. We are a traditional Navy style rum, a Demerara rum, a Navy strength rum, and a Dark rum.”

“At the moment, the UK is the only market we operate in. Expanding to a wider global audience is something we would love to do to bring such an historic and key rum figure back to the fore and rekindle the heritage and traditions of Woods.”

With that in mind, they have recently redesigned their bottles into a really nice dumpty design. They’re part of William Grant & Sons Distillers Ltd, and have access to the resources of a larger company.

We make a start with what’s labelled as “SVW”, a 92.9% abv spirit. Stephen Rutherford (Rum Development Specialist for William Grant & Sons) explains that this “is the first [spirit] of our Savalle column stills. It is the backbone to the blend.”.

On the nose you wouldn’t think it’s quite the strength it is, there’s good rummy notes of demerara sugar, vanilla and raisins. On the palate at full strength there’s an early note, along with oaks and sugars… it’s very strong (obviously), so cut 50/50 with water we still get a good light but pungent nose, which a much more accessible palate that shows brown sugars and raisins. It’s thick and mouthwatering.

Moving on, we look at the next sample labelled as SV, an 82.4% abv spirit. On the nose this is much more creamy than the SVW, but also maybe a little sharper. On the mouth it’s maybe a little easier (older?), but soon builds to very hot, so water needed to cut it… 50/50 it is. “This is the second largest part of the blend and typical Demerara styles of toffee, molasses and caramel.The SV is our second column distillate from the Savalle still”. With the water it becomes really creamy and easy, very a very enjoyable rum, which is a little more familiar in style.

The third, and last, component we try is labelled as REV, which we learn referrers to a Versaille still (rather than the Savalle stills from the last two samples). This is 69.7% abv, a little more familiar strength.

“This is our real key player, known as the Versailles still. It is the only remaining, working, single wooden pot still in the world, and is over 200 years old!It has been running and producing this distillate, building up depth and character like you can’t imagine.The smallest part of our blend yet, as you will see the absolute heart and soul of it. The still get’s heated by spargers, which in simple terms are metal rods.You have one rod down through the middle and then rings around the bottom.I guess you could imagine a kettle to help get your head around it.hese pump steam into the still to heat it up. The only reason this still works is down to the type of wood. It is made out of Greenheart, a local hardwood to Guyana which has the ability to be continuously wet.And it doesn’t change it properties. It really is truly amazing and we are very lucky to be able to get it. This is where Woods comes in to its own, rich bold molasses, deep stone fruits, and warming spice.”

Sure enough this tastes quite special and different compared to the other two samples, I don’t quite have the words for it, but you can tell the process it quite different. There’s a much more elemental grass and herbal note to it, which only becomes strong in smell when cut with water. It’s very thick mouthfeel keeps the herbal notes coming forward and leads into a sweet, green finish. Green? Kind of vegetal I guess.

“The individual distillates get shipped to us from Guyana as separate marques, and sent to Girvan where our William Grant & Sons distillery and warehouses are.This is the only part of the process we have changed, everything else is as it was.When the distillates arrive they are placed into refill American oak barrels.As Brian Kinsman (Our master blender at WG&S UK) explains, he is looking for the rum to lose some of the high volatile distilling notes, but not pick up too much oak character so we use old and exhausted casks. We age the rum for an average of 3 years, although some individual components will be older and/or younger. These same casks are then used and filled again with more Woods distillates.When the time is right, the 3 distillates are taken from the barrels, blended and cut down to 57% ABV before bottling.”

Finally we move on to the commercially available Navy Style blend. But first, what’s the difference between Navy Strength, and Navy Style?

“Navy Strength first off, is purely about ABV. It doesn’t relate specifically to rum and doesn’t require a certain style, it is simply talking about a minimum of 57% ABV for the spirit, something which comes from the old Navy days where they would soak some gunpowder in rum and light it. If it still ignited, it was proof of Navy Strength and originally this worked out to be 57% ABV minimum required for it to light. Navy Style on the other hand is all about the traditional way of making and blending rum. To be true Navy rum, you have to have at least part of your blend made in a Wooden still, as this produces the style required. Now it just so happens that the only remaining wooden stills are in Guyana, so any Navy rum has at least a small part of their blend from there.”

So, the Navy Style has a lovely deep colour, with really good long legs. On the tongue it’s massive and oily, thick and sweet, with a bit of a earthy hint to it (from the SV?). It’s tremendous. There’s a bit of spice, bit of a fresh eucalyptus type note. Yum! Adding a drop of water to take it down a little further in strength doesn’t hurt at all, a buttery creamy note really comes forward both on the nose and on the tongue, but leaving a slight oak, dunnage, earthiness lingering.

“Let it settle and you start to get the warm stone fruits, dates, raisins, followed by burnt caramel and cinnamon spice. Bitter cocoa and coffee come in right at the end as the rum stays with you, something we believe is a mark of quality.”

We end up pairing this with a really really dark chocolate, which also has sea salt in it. Maybe not something you’d have on it’s own, but with the sweet rum the two blend together really well. Nice call, thanks!

We learn that a little bit of caramel colouring is used, just to help with batch consistency.

You can get this at Master of Malt for £24.89, that seems to be a total bargain!

This entry was posted in Fun, Review, Rum and tagged Rum, Woods. Bookmark the permalink.