Posted on 8 March 2013 by Steve Prentice

This article is part four of the Malt Whisky and Place series. Please refer to parts one, two and three if you haven’t yet read them yet. 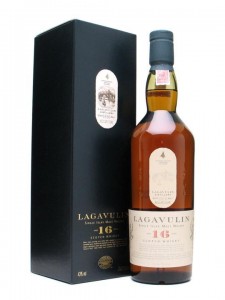 The last speaker for the evening was Georgie Crawford, manager at Lagavulin Distillery. The dram here was a Lagavulin 16 for us all.

From past experience in places such as the Scotch Malt Whisky Society (SMWS) Georgie starts to talk about whiskies and their regionality; customers like to know what region their whisky comes from so that they could know what style to expect, be they Lowland, Highland, Speyside, Islay, etc.

However Georgie thinks that regionality is generalisation at its worst, she goes on to explain that regionality originally had nothing to do with flavours or styles and was entirely down to politics, economics and convenience.

Regionality first came in to play in 1784 and was based upon the Wash Act which divided Scotland into the Lowlands and the Highlands for the purposes of whisky taxation, and was therefore nothing to do with flavour or style. Later on the Small Stills Act (1816) came in to force which balanced things back up, but the idea of regionality continued to be used. Also at this time Speyside as a style/region began to exist, where it previously hadn’t really existed before.

Georgie continues to say that from her experience of single cask, single malts from the SMWS, she doesn’t believe that there is such a thing as a “typical” style from the Lowlands, Highlands or Islay, and therefore there shouldn’t be such sweeping statements of regionality. The single casks that were bottled did not represent the distilleries house styles.

Georgie equates making whisky to a game of two halves. The first half is the production of the new make spirit, which she considers her job; to create the new make spirit exactly the same day after day. The second half being all about the wood. Two types of wood are used, American oak and European oak. She says that if you were to fill two casks, one of each type, and sit them side by side whilst maturing then when you open them you will get two entirely different whiskies even though they are still both Lagavulin. It is therefore then down to the job of the blenders to blend the casks together to create the required house style.

Georgie backtracks a little here to talk about her time whilst managing a whisky shop in Dufftown, Speyside, an area where there are many great distilleries all within a small area of one another. She notes than when doing a Dufftown tasting just how varied all the whiskies were from that area.

Two of the distilleries she talks about are within half a mile of each other, use the same water source, and are both owned by Diageo, so she knows that they are using the same malt and the same maltings. However the two whiskies are totally different from one another, one is light and floral, and the other is heavy and meaty. So she begins to ask the question, is it water and ingredients that are so important, or is it what is actually happening in the distilleries that make the biggest impact into the final flavour of the spirit?

After Dufftown Georgie moved on to work at Talisker Distillery on the Isle of Skye, and tells us about how breath taking a location it is there. Talisker is marketed as Skye’s only single malt whisky and its tagline is that it is ‘made by the sea’. Is it the location that makes this big sea salty giant of a whisky, or is it the people and the plant, or indeed a combination of the two?

Georgie says that every distillery has 1000 quirks, and she believes it’s these quirks, these points of individuality that build together to make the dram.

At Talisker the malt comes from Glen Ord (Inverness) and different varieties were used throughout the year, although the smoking level was always kept the same. The peat used for the smoking comes from the Black Isle area (not from Skye). The fermentation had set times, and the wash was always well balanced. The stills were unique in shape, and the cooling process was in traditional worm tubs. At the end of the process tankers are filled with the new make spirit where it then leaves Skye and is transported to central Scotland and filled into refill oak casks.

Around 99% of the production therefore happens and remains on the mainland. So, where does the big salty ozone flavours come from if the maturation is not actually happening on Skye? Georgie says they have chemically tested the whisky, and that there is zero per cent salt in it. If that is the case, then why do so many costal whiskies taste of the place where they’re produced? Old Pulteney can be described as having a maritime flavour, whereas whisky from down the coast at Glenmorangie has no saltiness in it at all. Why?

Back at Lagavulin they use many methods and control points to ensure that their production never varies. They ensure the water is contaminant free, and use 2.4 million litres of it at the distillery every day to cool the process in the still house. They also use an additional 120 thousand litres a day to make the product itself. She understands the concept, the belief that the water must have an impact in flavour. However the reason (as mentioned earlier) that there isn’t more distilleries by the M8 motorway on the mainland is because there simply isn’t enough mains water for production, great volumes of natural water are needed to make these products.

Fermentation is an important point at which flavour congeners are created, and Lagavulin has a set 55 hour fermentation period.

Stills are unique in size and shape to each distillery in Scotland and when any part of a still has to be replaced it is swapped out with a compete replica. This is because the interaction of copper with the spirit is so vital to the end flavours that if a larger scale change was made the final flavour produced would also be changed. The stills are always run to the same fill levels and the same temperatures again because changes to that would create something different.

Georgie says that it is these (and many more) control points that create the flavour and character that they need to create every time.

She says that similarly to Skye, a lot of Lagavulin production also leaves the island as there is a simple question of not enough storage space. If the distillery stored the production of Lagavulin for the full 16 years of its maturation in bourbon casks on the island then in circulation at any one time there would be around 240 thousand casks which just wouldn’t be possible to store on the island and would spoil the natural beauty of the surroundings, especially if all the other distilleries also did the same.

There is no doubt that Lagavulin cannot be made anywhere else in the world, but it’s down to the 1000 small quirks that were mentioned, the controls, the knowledge, passion and vigilance of the people making the product.

Georgie’s final parting question is this: Does terroir when used for whisky have to mean that a product takes on specific characteristics because of the place it is made, or can it be used to describe whiskies that just happen to have the flavours that reflect the place of its birth?

Andrew Jefford summarised the evening while we all had a dram of Bruichladdich Octomore 5.1. 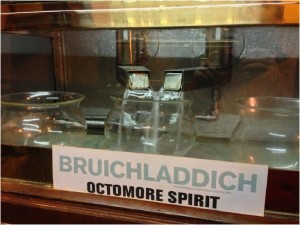 He suggested that there seems to be a general convergence of views, however there are two separate definitions of terroir coming through.

The Jim McEwan / Bruichladdich definition is quite close to the traditional French wine definition in that a malt whisky is an enormously complex compound of flavours of which every single one of the flavours can be traced back to some origin or other. Therefore it is counterintuitive and perverse to suggest that things that happen in places, like the gathering of the water, the growing of the barley, the aging process or the bottling process won’t leave some flavour trace somewhere in the whisky that will give it it’s character. Moreover Jim strongly emphasized the role of local craft, local understanding and love for the product and that is also often used as part of the French definition of terroir, it’s not just to do with the landscape, the soil, the topography, the weather conditions, etc, but it’s also local craft interacting with the whole process.

The Diageo definition of terroir seems to be best summarised as an accumulation of quiddities (i.e. the essence of an object) that happen in a place, but that are not necessarily derived from that place. Nonetheless the end result is, because the accumulation of quiddities is so unique, and that it does happen in a particular place, that you cannot therefore reproduce it anywhere else. So there is a definition of terroir there, but defined in rather a new way.

The parting question: Is the aroma and flavour of malt whisky principally attributable to place or to craft?

I shall leave you to come up with you own ideas on that. However, on the night, craft seemed to be the general winner.