Posted on 2 March 2013 by Steve Prentice

The whiskies produced on the Hebridean island of Islay are world renowned. But what makes these whiskies unique? Are they manifestations of the physical attributes of the island – the climate, the water, the barley, and the peat – or are they instead the consequence of centuries of craft and human artifice in the form of the malting, brewing, and distilling processes? In a tasting and debate chaired by the esteemed drinks writer Andrew Jefford, we were joined by representatives from two of the leading Islay distilleries, Bruichladdich and Lagavulin, each presenting their case as to how and why their whisky is distinctive. The aim was not to ‘prove’ that terroir exists or doesn’t exist for malt whisky, but to understand where the differences come from.

Andrew Jefford writes and broadcasts about different places on earth, and the foods, drinks and scents connected with them.
[expand title=”Click here for more info.”]Andrew is a contributing editor to both Decanter and The World of Fine Wine and the author of The New France (2002) and Peat Smoke and Spirit: A Portrait of Islay and its Whiskies (2004).[/expand]

Nick is now the Head of Whisky Outreach at Diageo.
[expand title=”Click here for more info.”]Nick originally joined United Distillers (now Diageo) in 1990, when he was responsible for establishing the company’s archives, now probably the world’s largest collection of historical material relating to the spirits industry. In the course of this work he has become an acknowledged expert on the history of the Scotch whisky distilling industry. Diageo is the largest producer of Scotch whisky, and the largest brand-owning company in the Scotch whisky industry. Nick Morgan’s knowledge of these famous and historic brands and the men and women who created them is unsurpassed.[/expand]

Jim is the Production Director and Head Distiller at Bruichladdich Distillery.
[expand title=”Click here for more info.”]Jim was born in the village of Bowmore on the island of Islay in 1948 and started work as an apprentice cooper at Bowmore Distillery at the age of fifteen. Over the subsequent fifty years he has worked in just about every position within the Scotch whisky industry, from malting through to warehousing. After seventeen years as general manager at Bowmore, in 2001 he joined the team looking to buy Bruichladdich and bring the old Victorian distillery back from the dead.[/expand]

Georgie is the Site Operations Manager for Lagavulin Distillery.
[expand title=”Click here for more info.”]Georgie moved to Islay as a child when her parents bought The Ardview Inn in Port Ellen, but her family roots on the island go much further back: on her father’s side, the family traces its origins back to the 13th Century when the MacMhuirrichs (later Currie) clan were the hereditary story tellers to the Lords of the Isles at Finlaggan Castle. Georgie has worked in every aspect of the whisky industry: she has managed The Vaults, the home of The Scotch Malt Whisky Society; managed famous retailers, The Whisky Shop Dufftown; and been responsible for the Brand Home Manager role at Talisker Distillery on the Isle of Skye. When she was appointed Manager at Lagavulin she was delighted to return to Islay 20 years to the week that she left at the age of 13.[/expand]

The various basic assumptions used during the debate were as follows (you may have your own definition, but for the purposes of the debate these were accepted):

It is distilled beer. It’s very pure beer brewed without hops or other flavourings or additives.

What is Scotch Whisky?

It is whisky distilled in Scotland. It has to be aged in Scotland for 3 years in oak casks and must be at least 40% alcohol by volume (ABV).

What is Malt Whisky?

Whisky is made from malted barley alone, and which is then double distilled in pot stills.

What is Grain Whisky?

Grain Whisky is made from a mix different cereals and distilled in a continuous still.

What is Blended Whisky?

A mix of Malt and Grain Whiskies.

A phenomenon by which food or drink products derive some or most of their characteristics from a complex of factors connected with place, rather than simply with recipe, methods or craft. It is very well recognised within the wine industry, for example a Cabernet Merlot blend made in Bordeaux will be quite different to one made in the Napa Valley, even if the recipe or method of manufacture is otherwise identical.

So, the question is whether or not terroir is significant in the creation of malt whisky.

We can say that malt whiskies are different from one another, but what we maybe can’t say is quite where those differences lie.

If place played no role at all in malt whisky production and it is rather down to the method and craft of distilling, then why are most distilleries located in difficult to reach areas, rather than logistically easy locations along the M8? Instead most great distilleries are located on Islay which is a hugely troublesome and expensive place to distil spirit, or in Speyside which is also a logistically inconvenient location.

So where could the differences in whiskies come from?

For the sake of argument these differences could be attributable to place or could be attributable to craft, recipe or method. For example place would give us the source of water (particularly if the source is wild such as loch water from the hills). The place of origin for barley could be significant, as could the source of peat and the aging location for the casks while maturing. However to contrast with that we could talk about the method, for example the malt specification, the brewing process and the distillation process, including shape and size of stills and other equipment, as well as the way in which they’re run.

A quick consensus (in no way taken as being factual or correct) taken by Andrew Jefford amongst various distillers came up with some interesting figures of what they thought actually helped create the various flavours and their importance: 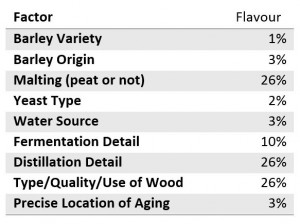 As mentioned this is in no way factual or accurate, but a general consensus that he found… Some people (Jim McEwan) may take issue with some of the figures. However one interesting thing to note was that most didn’t think that water source actually had much effect on flavour, which you may think is contrary to some of the marketing material that is used.

The question which we wanted to try and answer by the end of the evening was: Is the aroma and flavour of malt whisky principally attributable to place or to craft?

Please click here for part two of this article series to read the thoughts of Dr Nicholas Morgan.