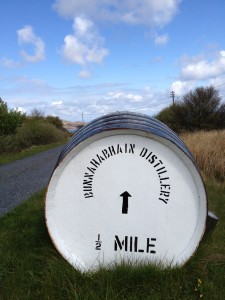 I’ve recently posted a mini series of five reviews of independently bottled Bunnahabhains, all of which have their own charm. Please see individual reviews for tasting notes.

The bottlings featured were:

The Bunnahabhain Distillery – pronounced Boon-a-havn, meaning “foot of the river” or more simply “rivermouth” (referring to the Margadale River) – was built in 1880/1881 by a partnership which was incorporated in 1882 as the Islay Distillery Co., and later amalgamated with Wm. Grant & Co., (Glenrothes – Glenlivet) to form Highland Distillers. They passed to the Edrington Group and finally to Burn Stewart Distillers, the current owners. The village of Bunnahabhain was established in 1881 to house the distillery’s workers, and the distillery still employs the majority of the village’s workers.

The drive towards Bunnahabhain from Port Askaig is great and the location of the distillery is stunning. The long and winding road according to Bunnahabhain offers wonderful views of Jura and the Sound of Islay.

The malt supplied to Bunnahabhain requires to be at levels of 3 p.p.m. Bunnahabhain is one of the milder Islay whiskies available and in its taste varies greatly from other fine spirits to be found on the island. The water rises through limestone and is transported by pipeline to the distillery, so it doesn’t pick up any peat on the way. Common bottlings are 12, 18 and 25 years old.

With regards to the reviewed bottles above, how would I rank them? That’s a tough call, they’re all excellent, there aren’t really any winners or losers, but if I were to rank them, I would rank them thus:

But please don’t let the list fool you, that’s my personal preference right now, and that’s likely to change in months to come as I fancy different things. Also because one had to come last, it doesn’t mean it’s the worst, there’s little to chose between them, they all bring different qualities. 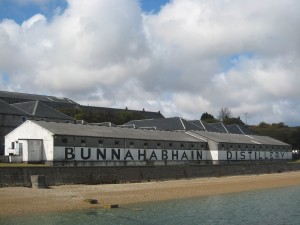 This entry was posted in Review, Whisky and tagged Bunnahabhain, Islay, Whisky. Bookmark the permalink.