Update: I’m really pleased to announce that my post has been chosen as a winning review of this dram, and as such I get to go and visit the distillery, excellent stuff, lucky me!

Let’s start by saying I’m a Glen Garioch Drambassador! What’s that? It was a facebook competition run by them to chose various fans / bloggers to receive their new mystery dram and a set of clues, and to be the first people to try it and write about it… and that’s what leads us here! I am one of those chosen few… and sure enough in the post I soon received the following lovely box of goodies… 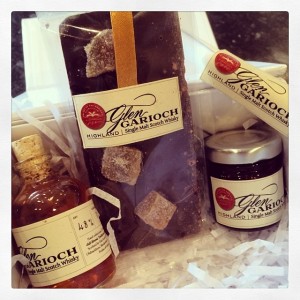 Let’s have a start with my tasting notes before looking at the clues, then maybe we can see if any of them fit the bill…

Nose: A very slight farmey note at first, with barley and sweetness. The nose then changes with air to lessen those notes and bring out lovely balanced oak cask notes. A slight acetone thing, quickly overtaken by nuts (the smell of nuts as they’re shelled) and then back to oaky notes again. After a while some chocolaty notes come forward. It’s quite a changeable dram! 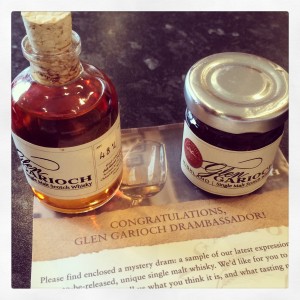 Finish: Very warming on your chest. Red Berry notes continue with a slight nutty theme, and there’s a slight sourness at the end of the fairly long finish.

Water: Releases sweeter notes on the nose. Reduces the spices so it becomes smoother, although the spices stay on the finish which is pleasing.

Thoughts: A Glen Garioch full of goodness! For me it needed a drop of water to really bring it alive and to sweeten it up a touch, but that’s just my palate. No guesses on age, middle aged, maybe 16yo-ish if I was pushed.

Tasting ideas: Glen Garioch sent this with a lovely bar of dark chocolate with ginger bits in it… Goes fabulously together, the ginger really picks up on the spices of the dram and makes them come through with a real freshness, the oak comes through in a much more vibrant young tasting way as well, fab… You should definitely consider this dram with food such as fine chocolate, it really makes it sing.

So… with that out of the way, let’s take a quick look at the clues.. I won’t overly dwell because I have no real idea, but here goes… 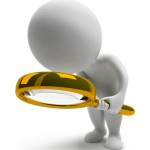 The entire batch of this expression was distilled one Summer’s day when Scotland took part in a global sporting event. The country where this event took place is closely linked to our tasting notes.

Before seeing the clues I pondered what casks this dram might have used, and port pipes (casks) came to mind. With that in mind, and with the fact in my mind that I went to Portugal in 2004 for the football I was all sold on this question until I realised that’s not a global sporting event, back to the drawing board.

Working backwards from the clues below then I’m going to stick my flag in the sand and say 1998 (23 June) FIFA World Cup in France. If that’s the case then that’d make the dram around 15 years old, which fits pretty much which what I felt it seemed on the tasting notes above. But hey, maybe I’m way out!

Our whisky is a perfect marriage of two regions, and you may find our whisky’s robust structure and complex flavours remind you of something else.

No idea really, this is a bit of a wooly clue… unless it’s simply intimating that the whisky from Scotland (region one) has been matured in casks from another place (region two). However, that’s basically always the case, so not much to go on there. After reviewing the clues below and wondering if this is a French (Bordeaux?) red wine matured or finished dram, then maybe that’s the regions it’s talking about since the Bordeaux region is made up of sub regions. Again you could apply that thinking to most other places that a cask might come from. Maybe the “robust structure and complex flavours” could be applied to a good French red wine, and if so maybe that’s what’s being alluded to here?! Seems the most likely.

The casks were previously stored in a cave, 100km from the Atlantic Ocean.

Parts of the Rioja region in Spain are around this distance from the sea… they sometimes use caves, and they use the French oak casks mentioned below. However… also the Bordeaux region in France fits the bill, and probably fits it better!

The oak shares its name with a breed of cattle.

Probably the easiest of all the clues, this is Limousin… being a region in France (that’s not too far away from the Bordeaux area) as well as a breed of cattle. Definitely steers you away from thinking sherry or port casks which I think tend to use different oak.

The pairing items in this package may also provide you with some clues.

We had dark chocolate and ginger (as mentioned above), and a jam. Or was it a jelly as there were no particular lumps, bumps or pips that I noticed. At first I thought plum, then I thought blackcurrant, and eventually I settled on blackberry jelly. Probably wide of the mark, could also have been damson. However if (as i’m thinking) this is a French red wine cask matured (or finished) whisky, then blackberry is often a note found in red wine, so maybe I’m right after all.

Thanks to Glen Garioch for the sample.

This entry was posted in Article, Fun, Review, Whisky and tagged Glen Garioch. Bookmark the permalink.