Posted on 8 December 2012 by Steve Prentice 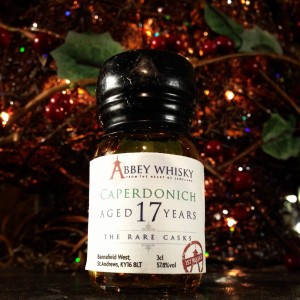 The Caperdonich distillery was a producer of single malt Scotch whisky that operated between 1898 and 1902, and then again between 1965 and 2002. Caperdonich whisky was a component of some blends of Chivas Regal.

Caperdonich, originally known as “Glen Grant #2”, was built in 1898 by the founders of the Glen Grant distillery, J. & J. Grant. Glen Grant #2 closed after four years, and was dormant until 1965, when it was rebuilt by Glenlivet Distilleries Ltd. By that time, British law prohibited simultaneously-operating distilleries from using the same name, and Glen Grant #2 was reopened as “Caperdonich”. In 1967, two steam-heated pot stills were added. Technological advances allowed the distillery to be run by only two people.

Abbey Whisky is family run business founded in 2008. They specialise in exclusive, rare and old whiskies that have been produced by the many great distilleries from around Scotland, and the world. They’re based in St.Andrews, Fife, Scotland and have a high focus on customer care.  They have recently started their own range bottelings called “The Rare Casks” which are whiskies as they should be, cask strength, non chillfiltered and no colouring added.

Now on to the whisky we’re reviewing…

From the info above we can see that this is indeed a rare whisky as the distillery has ceased production, RIP.

There is a medium light gold colour to this whisky giving the impression that it has been in bourbon casks, and indeed it has been in a refill bourbon cask for 17 years, it was distilled in 1995. This is often my preferred whisky style as I’m not a huge sherry fan.

The nose takes a moment or two to open up in the glass… it’s a little closed at first, but soon shows spicy, woody qualities that you’d hope for… some tropical fruit comes through along with vanilla sweetness.

On the palate there is a great warming mouthfeel to this whisky… and considering the very high ABV it is very smooth indeed and rolls around your tongue pleasingly. The non chilfiltered nature of this bottling benefits greatly here. There is a buttery spicyness that hangs around for ages.

The finish is long, warming and spicy. It is a very fresh tasting whisky for something that’s 17 years old, it feels quite modern on the palate and is an excellent example of a great Speysider that’s doing something it’s own way.

A drop of water actually does quite well for this whisky… it allows some lighter fruit notes to come out… but doesn’t detract from the peppery spiciness on the palate. Sometimes water doesn’t do a great deal for a whisky, but in this case it’s well worth adding some to bring it even more alive than it already is.

What a shame the distillery is now closed and no longer producing… as such there’s only 96 bottles in this particular release so if you’re at all interested then get your bottles in for Christmas! 🙂

Abbey Whisky are quite rightly proud of this bottling… it’s worth your time and attention… it’s a fairly complex dram that needs time and care to enjoy, don’t rush it down. 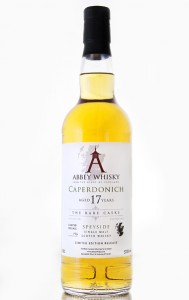 This entry was posted in Review, Whisky. Bookmark the permalink.