So, Ardbeg Perpetuum (Distillery Edition) has gone on sale today… or has it?

In what seems to be yearly tradition, the Ardbeg site has totally gone AWOL, leaving fans (and investors) trying for over 6 hours (at the time I write this) to get a bottle added to their shopping baskets and through to the checkout… for some the extra stress of putting in their credit card details only for them to be left back at the start page without knowing if their order completed or not.

It’d be interesting to know how many bottles Ardbeg has actually sold, I’d suggest the number is actually quite low as no one can actually get to the point of buying.

The problem appears to lie with the firm’s outsourced french web hosting, which has failed spectacularly in providing the managed solution their website promises. In the days of elastic cloud services these troubles should be well behind us, but sadly not. I wonder if any company IT people will have a hard time tomorrow? Probably not, it’ll just be blamed on the unprecedented “high demand“… although that was completely predictable and under their control to provide enough server grunt for it to work.

What it has done is unite a lot of people in talking about Ardbeg today… and that in itself is fantastic for the company, after all, they do say that there’s no such thing as bad publicity!

Soon enough all this will all be forgotten, some people will have bottles, some people won’t… what will the whisky actually taste like? Well, Ardbeg haven’t sent out any samples* like they have in previous years, so there’s little to no reviews around. No one will mind… the love for all things Ardbeg will continue.

UPDATE: As of 7pm-ish their site has finally kicked into life (or enough people have given up so that it’s no longer overloaded). The good news… there are still bottles in stock, so order away. Is there actually lots more available than we’d imagine? Yes, I suspect so. [Since publishing the stock has now sold out, but there are still bottles at the distillery if you happen to visit.]

* Ardbeg’s PR agency did in the end send out some samples, and my review of the generally released whisky is here. It’s reputed to be from the same batch as the Distillery Edition that this article refers to, just at a slightly lower ABV.

Will this be next years release? 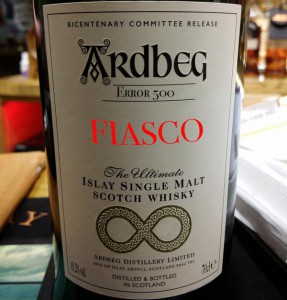 Thanks to @twattercraig for the pic!

This entry was posted in Whisky. Bookmark the permalink.