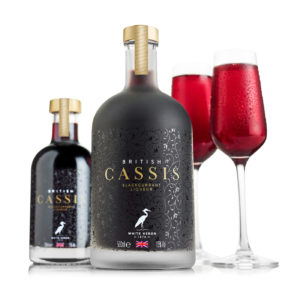 During the summer there’s nothing I like more than finding alternatives to malt, sometimes a change just hits the spot. I love a cold drink of Ribena, so I went on a quest to find the best British alcoholic Blackcurrant Liqueurs; something more adult for a summers evening cocktail.

Let’s take a look at the two side by side… 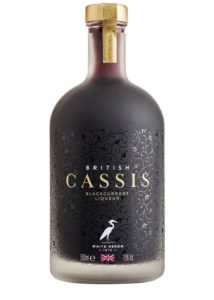 Info: In their Herefordshire farm, White Heron use a technique similar to winemaking in order to capture the intensity of freshly picked British blackcurrants. Once the blackcurrant juice has fermented naturally with champagne yeast, they blend it with a little vodka to fortify and add sugar to bring out the rich fruity flavour. Seen on BBC’s Countryfile and Dragons Den.
Colour: Intensely dark and rich, it coats your glass.
Nose: Like the nose, it’s rich, pungent and dark, and really quite adult (much more so than the Chase above). There’s a quality that almost seems aged and wintery, like a good Port maybe; it’s intensely fruity and a little sweet, with a slight earthy character.
Palate: The palate is nice and thick, and really easy going. The fruits are packed in there, mulched down, and almost slightly fizzy on your tongue.
Finish: The finish has a slight bitter sweetness to it, it’s sweet, but not too much, it’s adult through and through, with the finish being very slightly dry.
Thoughts: There’s a lot about this Liqueur that reminds me of a good Port; it feels almost more like an autumn or winter type of tipple, just because it’s so luxurious, fruit-packed and warming. I really love it, and could see it working fantastically well in a large variety of cocktails… for me it’s simply fantastic on it’s own (maybe with some ice), but I know it works really well in a proper Cider (think Sheppy’s, not Strongbow!) because I tried it… it’s like a good Cider and Black, but a level up on that. Treat yourself to a bottle!
Extra: Whittern farms produces more than three hundred tonnes of blackcurrants a year. Most of the fruit goes to make squash or is frozen. But the family farm also makes this English version of cassis, using champagne yeast. They are leading the way in the UK, as they are the only ones brewing the tipple this way.
Available: Master of Malt – £15.95

Overall Thoughts: Two absolutely fantastic liqueurs, both very enjoyable and affordable. There’s differences between the two, the Chase has more ABV, is a little thinner and more summery, it’s alcoholic Ribina, and it’s fantastic for that.. but if you want something slightly more adult, and something that’ll be a great mixer, or a great drink later in the year, then the British Cassis is the one to get, and is my favourite of the two on the night, although it’s a close call.

Samples both my own. 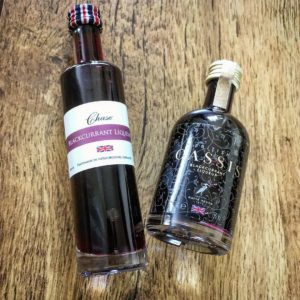 This entry was posted in Liqueur, Review and tagged Liqueurs. Bookmark the permalink.