Head to Head Review: Glenlivet Founder’s Reserve vs. Glenlivet 12yo 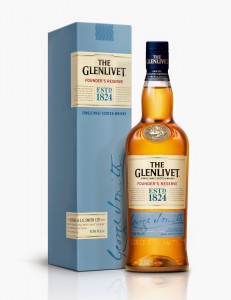 Let’s start with the news… Glenlivet has launched a new whisky into its core range called ‘Founder’s Reserve’ (not to be muddled up with one it had before called the same thing, but was very expensive).

It’s a no age statement whisky that (it’s suggested) is more fruity and creamy. It’s somewhat of a tinkering with the standard recipe, not really a direct head to head replacement for the 12 year old, rather something slightly different / newer. The 12yo will continue to be sold in some markets, but in the UK it’s being withdrawn from sale, so for the regular person in the street it looks like a direct replacement. It’s around the same price (if not slightly more it seems)… and with no age statement to it, it brings with it the regular debate of possibilities of dwindling stocks, whether it’s value for money when you don’t know the age, etc. I have elsewhere suggested it’s a sad move but others have described it positively as a brave step, so when I got sent an official sample I was quite pleased that my comments hadn’t put me out of the reviewing picture.

So without further ado, let’s take a look at both whiskies side by side… I’ll start with the 12yo… not a bottle I had on my shelf, so my thanks go to my neighbour and friend Hugh for providing me with the goods. After that we’ll take a look at the new Founders Reserve, and then I’ll draw my own conclusions…

Colour: Light gold, a little caramelly.
Nose: Fresh, light and bright. Malty and grassy. Sweet and fruity. Some green apples and a small touch of woody oak in the background.
Palate: Light and easy, not particularly thick. A tickle of spices, some sweetness, apples, summer fruits, melon and a drop of honey.
Finish: Smooth, sweet honeyed grassy malt with a backing of oak. It lasts longer than you may at first expect it to.
Thoughts: It’s not going to knock your socks off, but it’s a solid dependable and good quality dram at an affordable price. Kind of summery, and a great all round malt, good for the start of an evening.
Available: Master of Malt – £28.45

Colour: Light golden. Similar, if not a touch lighter to the 12yo.
Nose: A much sweeter nose than the 12yo with a more fruit up front; rich chewy fruits (think red and black wine gums). Definitely some younger malt in there giving it sweetness from the newer spirit. The barley malt is there but the grassy notes from the 12yo are toned down.
Palate: It’s thicker on the palate than the 12yo, although at 40% abv it’s more than likely filtered the same amount. There’s less spice making it smoother, allowing the younger sweeter notes to come through more easily, along with possible slight puffs of smoke from the cask char.
Finish: The finish is sweet, and fairly short, shorter than the 12yo.
Thoughts: It’s certainly younger in taste profile, that’s not necessarily bad, it makes it sweeter and less spicy from the wood interaction. It’s a nice dram, although the “premium quality” nature is more in the marketing than the bottle, it’s a good dram that will help Glenlivet get over its increased demand for stock.
Available: The Whisky Shop – £36

Overall Thoughts: As I mentioned above, these aren’t supposed to be direct head to head drams, they’re two different things (but as a replacement for the 12yo in the UK you can forgive people for drawing direct comparisons)… and when you have them in front of you, that’s certainly very true, they’re quite different. The 12yo had a much more classic profile to it, the Founder’s Reserve a much sweeter profile that would probably appeal to a younger audience with a sweeter palate. I lament the passing of the 12yo, and the dropping of the age statement, but as a dram on its own, it’s quite nice.

Thanks to Glenlivet for the sample. 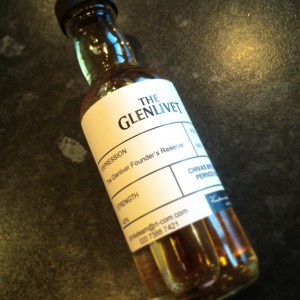 This entry was posted in News, Review, Whisky and tagged Glenlivet. Bookmark the permalink.