So recently I was involved in a Google+ Hangout (that’s a bit like a Skype or video conference call) with Sandy Hyslop, Ballantine’s Master Blender, and various other renowned figures from the whisky world including Joel Harrison (@joeldram) from Cask Strength and Carry On, Tiger White (@EdinburghWhisky), Tom Thomson (@ifotou) and Mark Gillespie (@whiskycast). This session was to investigate the inner workings of Ballantine’s 12 Year Old, a look at some of the grans and malts that make it up, and the other elements that go to make this creamy smooth blended dram of beauty.

Have a watch of the video below for all the full details! I’ve written up the best bits in case you can’t watch the video, and there’s also various official notes.

You should start 6m 52s in, everything before that is boring and slightly tedious as we wait for people to come online. 😉 The video should start around that point automatically with any luck when you press play!

Some of the topics we covered are how Sandy controls the quality of Ballantine’s, what the job of a blender is, and how they keep things the same year on year.

Sandy describes himself as only spending around 5% of his time coming up with new products, the other 95% of his time is spent keeping the blends the same year after year. He noses 100’s of whiskies per week from newly distilled spirit through to matured whisky, but he only tastes a small amount of that, it’s all in the nose. His time is split between his Glasgow HQ and Speyside where he keeps checks on samples from 12 of their distilleries. 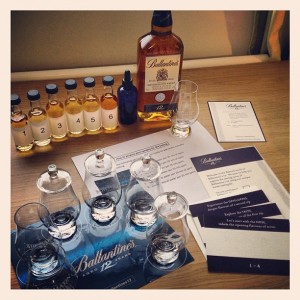 Sandy tells us how on a day to day basis he reduces his whiskies all to 20% ABV so that they’re all on a level playing field, and that’s what we’ve done with the six samples we were sent for the tasting session. This is to help prevent his nose becoming anesthetized from the alcohols in the spirit.

There is a strict cask policy at Ballantine’s so that they know exactly what stocks they have and what fill type is in use / how many times the cask has been refilled etc. More than that Sandy needs to know how many years a cask has been filled as that also affects it’s reuse the next time, for example a cask that’s been used twice for 4yo whisky is 8 years old, whereas a cask that’s been used twice for 12yo whisky is then 24 years old, so quite a difference. Sandy mentions that grain spirit matures quite fast, so he’s happy to use 2nd or 3rd fill casks for grain whisky as the outcome would be the same, i.e. he would use first fill casks for malt, and second fill casks for grain.

Joel asks a question about the differences in grain distilleries around 17min into the video (to 20min), I’ll leave you to watch that, but it’s interesting to hear Sandy’s breakdown of some of the various grain distilleries that he knows about, an area that is often less discussed, and his thoughts about keeping on top of what is a fairly industrial process.

A question at around 45mins in is interesting in covering the topic of Ballantine’s editions that focus on a particular distillery profile. I’ll let you roll on to that for yourself.

In 2013 there are 35 malt whiskies that make up the Ballantine’s 12yo blend, and this figure changes as needed from year to year to maintain the consistent flavour, some years maybe 32, sometimes maybe 37. For Ballantine’s 12yo, 810 barrels equivalent are used per batch, once every 10 days, no marrying required.

The samples we had were: 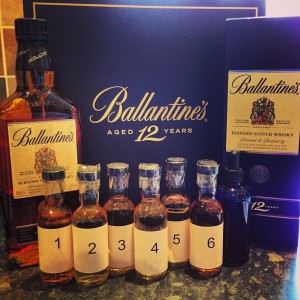 2) 12yo Grain Whisky that goes into making Ballantine’s 12yo – Light, chamois leather, sweet, vanilla fudge, floral character. Sweet clean base that complements the malts in the blend. There was a mix of four grains in this sample predominantly made up of American Oak Barrels, giving it the sweet vanilla character. Very light and refreshing on the palate.

4) 12yo Miltonduff, First Fill – The other key fingerprint malt of Ballantine’s. Spicy, heavier in weight, nutmeg, more oily which gives a heavy weight to the blend. Fruity on the palate, apples, more flavour than the nose would suggest. Good long finish.

5) 12yo Malt Whisky – A mixture of all the (35) malt whiskies together that makes Ballantine’s 12yo. If mixed with sample 2 in the right proportions you could make your own Ballantine’s 12yo! A big round ball of flavour, smooth, weighty malt. 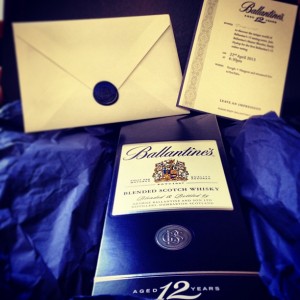 – Ballantine’s 12 is produced by selecting and combining over 40 malt and grain whiskies aged 12 years and over.

– There have only been five Ballantine’s Master Blenders since the brand was created in 1827. Being a Master Blender is a revered job that takes 20 years just to learn and a lifetime to master!

– Ballantine’s 12 has won over 22 awards in international blind tasting competitions in the last 11 years.

– Ballantine’s seek out the finest malts from all over Scotland and blend them to make perfectly balanced, smooth and creamy whisky.

– Master Blender, Sandy Hyslop, can identify over 10,000 smells in an instant. That’s how he can spot a winning blend at the merest sniff and that’s why Ballantine’s believe that his nose is worth millions!

Ballantine’s Finest – the leading expression within the portfolio.

Ballantine’s 12 Year Old – the third best-selling Scotch whisky in China and a discerning yet accessible whisky with contemporary relevance.

Ballantine’s 17 Year Old – an ultra-premium brand with a deep complex flavour, regarded as THE Scotch whisky by consumers in the Far East.

Ballantine’s 21 Year Old – a truly iconic whisky that is satin smooth with a long, lingering finish.

Ballantine’s Limited – combining some of the rarest and most valuable grain whiskies, this blend is an extremely complex expression available in restricted quantities.

Ballantine’s is the No 2 ultra-premium Scotch whisky in Asia, No 1 Scotch whisky in Europe and the range sells over 70 million bottles a year worldwide. Ballantine’s has won more than 120 trophies and medals at international competitions in the past 10 years for quality, as a result of its unique richness of character and perfect balance. The range, from Ballantine’s Finest to the exclusive 40 Year Old, is the most extensive in the world of Scotch and is maintained by the latest in a tradition of Master Blenders that dates back to 1827.

At the time of publishing the 12yo seems very hard to find, but I would imagine you’ll find it soon in all the usual retailers. The 17yo is readily available for under £50 and highly recommended (see previous blog post for review).

This entry was posted in Fun, News, PR, Review, Whisky and tagged Ballantines. Bookmark the permalink.