Posted on 13 November 2013 by Steve Prentice

I’ve been lucky enough to recently join a Twitter Tasting to review the four core malts of the Laphroaig range, i.e. 10 Years Old, Quarter Cask, Triple Wood and 18 Years Old. There’s many others out there, but these are the main stays of the brand and generally easy to find in the shops and at fairly affordable prices. Let’s take a deeper look… 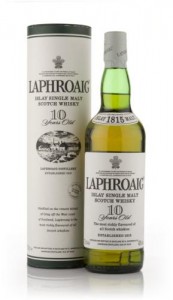 The original Laphroaig, made with ex-bourbon casks & distilled the same way today as it has done for over 75 years. In making Laphroaig, malted barley is dried over a peat fire. The smoke from this peat, found only on Islay, gives Laphroaig its particularly rich flavour.

Nose: Youngish, fresh and instantly recognisable, heavily peated, but with a trademark peat that’s heavy in iodine / TCP type smells. Costal, breezy, but also quite fruity underneath everything. Tarry fudge. Someone mentioned over cooked oatcakes when done over an open fire, a fair description.

Palate: Fairly light on the palate, no heavy oils here, but it’s still got a nice mouthfeel which builds with spices fairly quickly. It’s earthy and strong with it’s rich peat flavours, but also reasonably smooth and enjoyable. Some coffee / espresso notes coming through the smoke along with a hint of citrus sweetness.

Finish: The finish is fairly refreshing and gently warming leaving a pinch of spice behind on your palate and whiffs of smoke in your throat. Peat finishes are by definition usually fairly long, with that in mind this is possibly one of the shorter finishes.

Thoughts: A classic Islay malt, what more is there to say. If you’re used to peat, then you’ll find the flavour quite strong, but otherwise it’s quite light and easy to drink due to the 40% ABV. 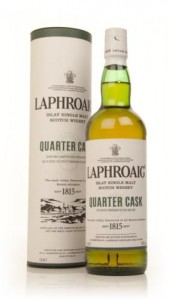 Laphroaig Quarter Cask offers a doubling of flavour, due to the double maturation in two barrels made of American oak. Still-maturing whisky from standard ex-bourbon barrels is transferred to quarter casks & left to rest in a warehouse just a stone’s throw from the Atlantic shore.

Nose: A little more lively than the 10yo on the nose, slightly less overtly saline / costal, but it’s still there with the TCP notes, and more sweetness than in the 10yo. Slightly less fudgey, more toffee with fresh back notes.

Palate: Fuller oils hit your mouth, but actually still quite medium in feel, although fairly creamy. Spices build more quickly, and there’s a more genuine earth note to the oak influence. Peat smoke is there giving your tongue a little tingle.

Finish: Up front and warm, packing a punch with flavour but again tailing off reasonably fast, although leaving oils and peat smoke around for much longer this time. Some fresher oak cask notes right at the end lingering around.

Thoughts: It’s worth the £5 extra just for the extra ABV alone. It’s sweet peaty drop of Islay good ness not to be missed. 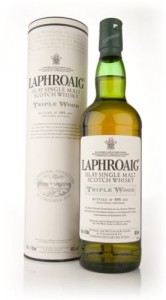 This expression has enjoyed a triple maturation in 3 types of casks. As with the Quarter Cask, the first maturation is in American oak, ex-Bourbon Barrels. Barrels are then selected, containing a range of different aged spirit and transferred into small 19th Century style Quarter Casks for a second maturation. The final maturation is in specially selected, large European oak, Oloroso Sherry Casks.

Nose: A little more complex, give it a bit of time. Sweeter richer fruit notes are to be found lurking amongst a bit of chocolate. Obviously there’s peat and iodine there, but a little more restrained and balanced. Given more time sweet creme brulee notes come out along with more of a cask char smoke.

Palate: A thicker mouthfeel here, possibly helped by the triple maturation and the sherry casks, and it works for me. It’s still quite spicy on your palate, but smoothed by the extra sweet fruits which also help to settle the more medicinal notes and tar that you find in others in the range.

Finish: Fairly long, smokey and sweet, but yet salty still as well… Winter stewed fruits bubbling in a pan over an open fire.

Water: Not mentioned in the reviews above because not really needed, but actually I think a wee drop helps here, try it out!

Thoughts: Pretty good stuff… I love sherried Laphroaigs and this is kind of one, but it’s not quite got the richness that maybe I’d want for a really sherried one, it’s a half way house and maybe not yet quite found it’s way. I’d still pick it happily in a pub over the rest though! 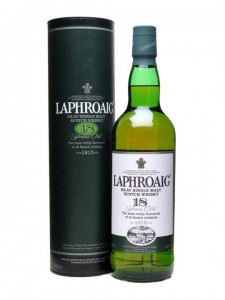 Nose: Very much lost some of the Laphroaig intensity of the younger malts, but still really enjoyable. For me a costal salt comes through more clearly because the medicinal notes and smoke are dialled back a notch. It’s sweet and full of malted barley with a touch of milk chocolate. A salted milk chocolate digestive biscuit for sure.

Palate: Much more gentle, the spice has been diminished, which actually I rather enjoy, it’s an older and more statesmanlike dram this, still smokey, but the TCP notes have been dialled right back and you can find many more rich notes from the oak casks.

Finish: Beautifully warming on your chest, slow and lingering but with a refreshing twist from the American oak.

Thoughts: It’s really quite different to the 10yo, don’t expect more of the same but older, it’s more elegant and restrained, and actually in my mind much the better for it, well, especially later in the evening when you’re not looking for a slap in the face from the younger feisty drams.

Around £71 – The Whisky Exchange 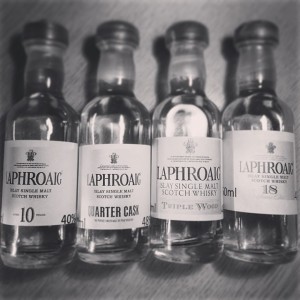 Thanks to Laphroaig for the samples.

This entry was posted in Review, Whisky and tagged Laphroaig. Bookmark the permalink.