Posted on 3 November 2013 by Steve Prentice 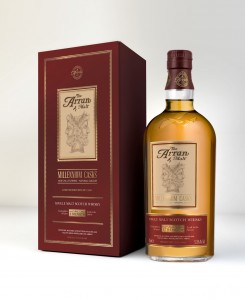 The Isle of Arran Distillers has unveiled a special charity whisky produced on 31st December 1999, the Millennium Casks edition which captures a landmark moment in time. Made from a mix of 35 bourbon barrels and 10 Sherry Hogsheads, the new release reached shelves in the UK on 28th October with just 7,800 bottles available worldwide.

Retailing at £64.99, a donation from every bottle sold will go to the Arran Trust, a conservation charity which funds projects that look after the beautiful landscapes and environment of Arran. One such project is the footpaths on the island which lead to Loch na Davie – the water source for Arran Single Malt.

“Bottled without chill-filtration, the malt has a zesty nose with an edge of spice. Arran fans will be able to detect our hallmark flavours of orchard fruits and baked apples, which are complimented by a sprinkling of vanilla and cinnamon. This whisky is delicious served with a splash of water, which helps to expose the layers of creaminess in this unique dram. As with most of our malts, this whisky is unpeated.”

Palate: This is un chill-filtered, and has a great full mouthfeel because of it, fairly oily and gently building spices could easily fool you into thinking this has less ABV that it actually does, it’s smooth enough and easy at the high strength. It’s well balanced, buttery and creamy, predominantly bourbon in nature with some extra fruit to sweeten it up and increase its depth.

Finish: Summer fruit salad works its way into your chest leaving a sweet, malty warming hug, hanging around for a while, and leaving wood notes in your mouth to finish off with. It’s not a particularly a long finish, but it’s appropriate for the style.

Water: As suggested a drop of water works well with this dram, it brings out more vanilla and toffee notes, and reduces the spices so that on the palate so that it’s a touch lighter, yet is still full bodied and fruity. It increases the woodiness wee bit further which may not be to everyone’s taste (slightly bitter back note), but I’m happy with it.

Thoughts: It’s lovely stuff… it costs that bit extra because it’s cask strength, because of its small batch nature and because of it’s slightly older age, but it’s worth the money, especially if you’re an Arran fan, or like to support the smaller guy… Some money goes to a worthwhile charity, and I’m a fan of supporting local charity! Around 88 in score, very pleasant to sit back and relax with earlier on in the evening before moving on to heavier sherried or peaty drams.

Thanks to Arran for the sample. 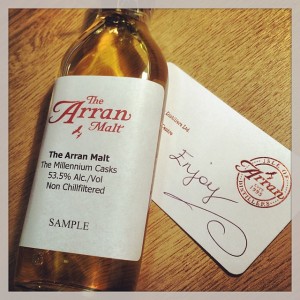 This entry was posted in News, Review, Whisky and tagged Arran. Bookmark the permalink.