Posted on 3 February 2015 by Steve Prentice 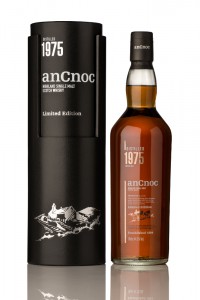 This February anCnoc Highland Single Malt Scotch Whisky has unveiled its latest creation – anCnoc 1975 Vintage. Bottled late in 2014 this is the oldest expression ever released from Knockdhu Distillery and promises to be the ultimate treat for anCnoc fans and the most discerning whisky drinkers around the world.

The whisky comes from only three American oak and Spanish oak ex-sherry casks laid down in 1975. The release consists of 1590 bottles. The whisky comes in its most natural form, it has not been chill-filtered or coloured and is presented at the cask strength of 44.2% ABV.

The recommended retail price is £300. anCnoc 1975 Vintage will be available in several key markets around the world including the UK, USA, Russia and Canada.

In-keeping with anCnoc’s ethos of ‘Modern Tradition’, the 1975 Vintage is presented in a simple, striking bottle and encased in an elegant black tube.

“The last 12 months have been a very ambitious and a very successful time for anCnoc. We unveiled the limited Peaty Collection to a global audience and launched two travel retail expressions as well as our popular 18 Year Old. The 1975 has been anticipated for a number of years, it’s distinctively anCnoc, a fantastic whisky and a superb addition to any whisky collection.”

This entry was posted in News, PR, Whisky and tagged anCnoc. Bookmark the permalink.