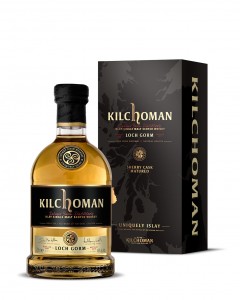 Kilchoman announce that the launch of an entirely new range called Loch Gorm is due on the 8th of April! Named after a famously peaty loch at the end of the Kilchoman drive, Loch Gorm will be the only fully ex-sherry cask matured release from Kilchoman. Loch Gorm will be periodically re-released as a more mature version with each bottling differentiated by distillation and bottling years printed on the label.

You may remember last year Kilchoman released a Sherry Cask bottling in similar packaging but this is now being renamed Loch Gorm for all future fully sherry cask matured releases. This, the first release of Loch Gorm was matured in Oloroso sherry butts for over 5 years and finished in Oloroso sherry hogsheads for six weeks to give added depth of colour and character.

A perfect dram for the ongoing winter we seem to be having!

This entry was posted in News, Whisky and tagged Kilchoman, News. Bookmark the permalink.