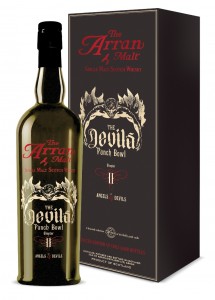 The new dram, named Angels & Devils, is the second part of Arran’s trinity of ungodly spirits to darken our shores. It follows on from the original Chapter I, which sold out in record time when it was released last year.

Described by master distiller James MacTaggart as a ‘true contrast of light and shade’, the whisky is made using 27 different Arran casks, each meticulously selected and combined to create a whisky with great depth and rich character.

Commenting on the flavour of the new release, James said: “With vibrant notes of classic dried fruits, light spice and cigar box, layered over a sherry-sweet base, Angels & Devil’s drinks more like a dream than a nightmare.

“Bottled at natural strength without chill-filtration, the spirit has a devilish ABV of 53.1%. This dram will not disappoint as notes of dark chocolate and delicate butterscotch spice set taste buds alive.”

Angels & Devils is based around Sherry Hogsheads and includes Arran’s oldest ever peated Arran barrels from 2004.

Just 6,660 bottles have been released worldwide and interest is already high.

Euan Mitchell, managing director, said: “We were thrilled with the reception our first edition of The Devil’s Punch Bowl received and we’re sure this one will be met with the same approval.

“The whisky is being distributed on a strict allocation basis, as we’re already enjoying a high level of demand both in the UK and from export markets.”

“Each cask in this whisky has been hand-selected and the release is testament to the consistent superior quality of The Arran Malt across each year of production.”

Arran Distillery is a multi-award winning distillery and has won acclaim for its 14 Year Old, 10 Year Old malts as well as many others. The Devil’s Punch Bowl Chapter I also won a top award in last year’s World Whisky Design Awards.

Euan continued: “Angels & Devils is a spirited single malt whisky which will stand out. It will appeal to people who look for quality and something unique – a perfect choice for those who dare to dram with the Devil.”

This entry was posted in News, Whisky and tagged Arran, News. Bookmark the permalink.