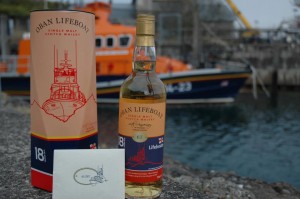 When Oban Distillery celebrated its bi-centenary in the 1990s it gifted a hogshead – 250 litres – of whisky to the local RNLI (Royal National Lifeboat Institution) station.

The spirit was left to mature in a darkened warehouse for eighteen years, earmarked for a fundraising venture to mark the lifeboat station’s 40th anniversary last year.

Oban Lifeboat treasurer Les Stewart and a team of dedicated volunteers, including the lifeboat’s former Honorary Secretary Norman MacLeod, have been busy organising the final bottling and packaging.

Oban Lifeboat hopes to make a profit of over £30,000 from the sales of the whisky to help with the station’s crucial lifesaving work.

This is a rare independent bottling of Oban. The hogshead was filled at the Distillery on 29 July 1994. The bottling took place at Premier Bond in East Kilbride (Douglas Laing & Co Ltd) on 18 February 2013. Distilled in Oban by Diageo. Bottled by Douglas Laing & Co. Ltd. Bottled at a strength of 49.7% alcohol by volume, the whisky is unique and is destined to become a collector’s item. One of only 297 bottles.

Fresh and distinctly clean initially on the nose – it then warms to sugary butter, light spices and fresh cut grass.

Available to order now from The Green Welly Stop for £195.
All proceeds go to Oban Lifeboat.

This entry was posted in News, PR, Whisky and tagged Oban. Bookmark the permalink.