Whisky entrepreneurs Andrew and Scott Laing, along with their father, Stewart, today reveal plans for Islay’s first new distillery in a decade. An application has been submitted with Argyll and Bute Council to build the new malt whisky distillery at Ardnahoe, on the North East coast of the island. Should permission be granted for the £8m project, land currently owned by Islay Estates will be transferred to the whisky company.

Since Hunter Laing & Co. began operating in May 2013, the highly successful independent bottler and blender has been investigating the opportunities for owning its own distillery. After extensive work, the family pinpointed the four-acre site near Port Askaig as the only viable option to meet the needs for their expanding business. Subject to approvals, the new distillery is expected to see the first drop flow from their stills by the end of 2017.

Commenting on the plans, Andrew Laing, Director, said: “We have shown formidable growth in the last two years and the time is now right for us to invest for the future. While this is our family’s first foray into distilling, my father’s 50 year record of blending quality products of high demand and our three generations of expertise in the whisky industry ensures we enter this venture with strong confidence.”

Adding his thoughts, Scott Laing, Director, said: “Our family has had a long affiliation with Islay and my father spent time in the early part of his career at Bruichladdich Distillery. The opportunity to bring fresh investment to the island, create jobs and provide a new chapter in Islay’s illustrious whisky-making history is tremendously exciting for all of us.”

The building of the distillery is planned in two phases, with the first seeing the establishment of distilling operations, warehousing and a visitor centre comprising of a café, tasting room and shop. The second will see an expansion of distilling operations and further warehousing. Contractors for the build have been identified and will begin cutting turf in May 2016, pending approval. The distillery will create several full-time positions on the island, as well as a number of seasonal roles.

Lord Margadale, Chairman of Islay Estates, said: “We are thrilled to be working with Hunter Laing in the development of a new distillery on Islay. This project will contribute considerably to the island’s economy through the direct provision of jobs, it will also increase the demand for barley from Islay farmers and add to the attraction of Islay as a destination for the increasing number of followers of Scotch whisky around the world. Islay is a beautiful, tranquil and fertile island that is famed for its distinctive whisky; this is an exciting opportunity to build on this reputation and to help secure a strong economic future for the Island.”

Remarking on the opportunity, Stewart Laing, Managing Director, said: “The surge in demand for single malt Scotch whisky from Islay in recent years has been extraordinary. While the established distilleries on the island have been increasing production, there is obvious room for yet further expansion in output as discerning drinkers the world over are charmed by the rich, smoke-filled flavours that have become such an integral part of the island’s style of whisky. The new facility is being designed to create a particular style of spirit that we know from our experience of selling whisky in 65 countries around the world will appeal to the Islay whisky lover. By building this distillery, we are fulfilling a long held dream. ”

Now the application has been submitted to the council, a 21-day public consultation period will begin. 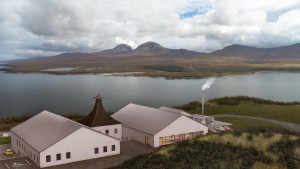