Posted on 4 December 2015 by Steve Prentice 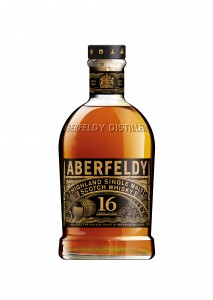 Aberfeldy 16 Years Old is entirely finished in premium Oloroso sherry casks, allowing a sumptuous and more pronounced sherry accent to the malt, giving a suggestion of dried fruit and spicy notes that only the finest of quality casks contribute.

Built by the Dewar family in 1898, the distillery is one of a handful remaining in Perthshire. The house style is rich but smooth and accessible with an emphasis on notes of honey. The long fermentation time of 70 hours allows for greater flavour development as an extended fermentation encourages the creation of more esters which in turn give the whisky fruitiness.

Known as The Golden Dram, Aberfeldy’s precious water source, the Pitilie Burn, is steeped in local folklore and its qualities have long been sought-after. The burn is renowned for being rich in mineral deposits including alluvial gold.

The newly released Aberfeldy 16 Years Old, bottled at 40% ABV, joins the existing portfolio of single malts. It is described as rewardingly viscous and sweet; full of fresh fruit and buttery notes. Priced at £62.00, the new expression is available in 11 markets around the world: Belgium, Canada, Germany, France, Japan, Lebanon, Netherlands, Russia, Sweden, Taiwan and the UK.

This entry was posted in News, PR, Whisky and tagged Aberfeldy. Bookmark the permalink.