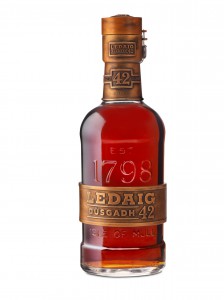 Burn Stewart Distillers has released a rare, one off malt to key international markets – Ledaig 42YO, a robust, smoky malt whisky with a rich and distinct history.

Named Dùsgadh, meaning ‘awakening’ in Scot’s Gaelic, reflecting the long, dormant period of maturation, this is the rarest and oldest Ledaig ever released and the next 40YO Ledaig single malt won’t be available until 2036.

The story of handcrafted Ledaig 42YO begins on the Isle of Mull at the Tobermory Distillery, the only distillery on the mystic island and amongst the oldest commercial distilleries in Scotland. The malt’s old world charm reflects the brand’s spirit to do things the traditional way, by hand.
In a rare feat of master blending, this Single Malt Scotch Whisky has retained all of its deep, peaty intensity, which is almost unheard of for an expression of this age. Throughout its four decade history, the Scottish landscapes and climates to which Ledaig 42YO has been exposed, have strengthened the malt’s distinctly rich and smoky flavour.

The heavy intensity of Ledaig 42YO makes it an ideal digestif, or accompaniment to a fine cigar. This depth also means that it is best enjoyed neat and without water or ice, which would only dilute the profusion of flavour.

Like all of the malts in the Burn Stewart portfolio, Ledaig 42YO is un-chilfiltered, ensuring that more of the whisky’s natural aroma, flavour and texture remain in the bottle, deepening the taste.
The luxurious packaging which houses Ledaig 42YO has been inspired by the copper from the retired stills, which released the first spirit in 1972 and has finally reached the end of its distilling life. The aged copper has been used as part of the Ledaig 42YO packaging to celebrate this milestone and honour its rich heritage.

As an appreciation of our customer’s commitment to Ledaig, each box of Ledaig 42YO contains a handcrafted copper card, which entitles the buyer to inherit a bottle of Ledaig 10YO from the last distillate from the now retired stills, which will be available in 2025.

Master Distiller at Burn Stewart Distillers, Ian MacMillan said: “I’ve been distilling for almost 40 years and the smoky aroma retained in Ledaig 42YO is the highest I have ever come across in a 40YO island whisky. It’s the intricate and unusual process that has allowed this liquid to keep its strong, peaty characteristic. Under close supervision and moving homes, this liquid has been allowed to develop into a truly unique malt.

“The precious copper that released the first spirit in 1972 has reached the end of its distilling life and has produced exceptional vintage malt, which I am looking forward to sharing with an exclusive group of whisky lovers across the globe.”

Burn Stewart Distillers will release only 500 bottles across select international territories including the UK, North America and Asia. The RRP for Ledaig 42YO, 70cl and 75cl bottles is £3,500 and this includes the 10YO bottle buyers will receive in 2025.

For further information please visit www.ledaig42.com (live as of 5th May). 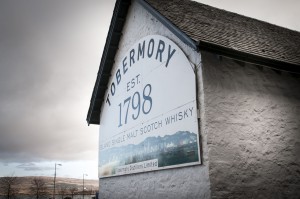