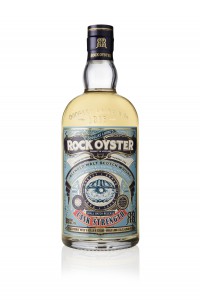 Douglas Laing & Co, Brand Innovator of the Year 2016 at the Icons of Whisky Awards, has announced the release of its Limited Edition Cask Strength Rock Oyster Island Malt Scotch Whisky.

The new Cask Strength Limited Edition is bottled at a powerful 57.4% ABV and delivers a massive amplification of all those coastal qualities from the original. Punchy peat smoke meets sweet honey and a briny, salty character, in a flavour combination that promises to transport the drinker to Scotland’s Whisky Islands. In line with the Douglas Laing family philosophy, the spirit is proudly without colouring or chill-filtration.

The new release packaging is a creative evolution of the original, offered in a premium gift tube with gold foil detail. Bespoke illustration against a maritime backdrop depicts a crew of sailors battling to retrieve a monstrous oyster from stormy seas, reflecting that monstrously maritime spirit inside. Those familiar with Douglas Laing’s Remarkable Regional Malts may recognise the bearded fisherman depicted in the scene…

Says Douglas Laing’s Managing Director Fred Laing: “For Rock Oyster Cask Strength, I’ve selected a range of casks from the Islands and lovingly vatted them together to create a blast of sea air on the nose and a tempestuously oceanic storm on the palate. Anticipate a big peat hit full of Islay phenols, iodine and coal dust, with a shake of pepper softening to a distinct honey sweetness from the Arran casks. The Isle of Jura brings waves of citrus and barley to the mix, and Orkney fetches up some salt from the deep.”

This entry was posted in News, PR, Whisky and tagged Douglas Laing. Bookmark the permalink.