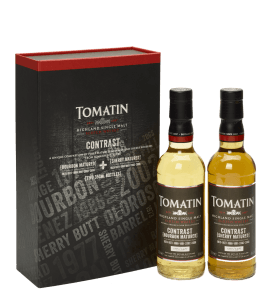 In each pack, there are two 350ml bottles each containing a vatting of casks from 1973, 1977, 1988, 1991, 2002 and 2006, with one of the vattings being from Ex-Bourbon casks and the other from Ex-Sherry casks. Bottled at 46%, both whiskies are non-chill filtered and natural colour, and display greatly contrasting colours and flavours.

Casks from the same six years were selected and vatted by our Distillery Manager, Graham Eunson – “It is well accepted that up to 70% of the final flavour of Scotch Whisky is derived from the cask it was matured in. We wanted to directly compare the effect of different casks on the same whisky – the actual contrast between these two whiskies is far greater than we had anticipated. These are two incredible whiskies which consumers will enjoy comparing side by side in their own home.”

There are 5,400 of this limited edition pack available and it is expected to retail at £99.99.

This entry was posted in News, PR, Whisky and tagged Tomatin. Bookmark the permalink.