Posted on 6 September 2014 by Steve Prentice

All distilled on the same day, the whisky was matured for nine years in traditional American Oak casks and was then transferred to four different types of Sherry butts for a period of over three years. As a result each of the four expressions have developed their own unique characteristics. The range includes: Fino, Manzanilla, Oloroso and Pedro Ximenez.

With its Spanish sherry inspiration, the name “Cuatro” is fitting as the Spanish word for “four”.

Graham Eunson, Distillery Manager, launched the new release with a Tweet Tasting on the evening of 3rd September, where selected tasters were provided samples of each expression along with its relevant Sherry. He said: “We are constantly striving to innovate and push boundaries and I believe Cuatro is a great example of something yet again different from Tomatin Distillery. Sherry is a key feature within our core range and this limited series allows us to delve deeper into the different effects it can have on our whisky.”

Light in colour, straw-like. This is the nose that I love Tomatin for, it’s yummy, light, a little nutty, with a slight citrus background. Hummm. 🙂
On the palate this is medium to thick with oils and a bit spicy, there’s defo a nice sherry background, a bit nutty but light. Long sweet finish that creeps over your chest slowly. Yum.
Coming back to the four again, the Fino really is a winner for me, it keeps the Tomatin distillery style while adding in a light sweetness as a base, it’s my favourite as I think it’s probably the most easily accessible and drinkable without requiring too much time and thought.

Lightly golden in colour. This has a bit more base to it as a note, the light christmas cake type notes you often find, maybe Amontillado? (it wasn’t, it’s Manzanilla). Slight salty note there which should have pointed me at the Manzanilla, and quite a lot of dry spices.
Kind of dark and light, there’s a depth on the nose and also on the palate, but also light background notes too. It’s smoother on the palate than the nose might suggest it would be. Similarly medium to thick mouthfeel to the Fino. Long, slightly salt and pepper warming finish. For me I prefer the Fino over this, it’s ok, but not quite my cuppa tea.

Light gold. On the nose the sweetness and depth continue, more nuts and christmas along with boiled sweets. 🙂
It’s like a swimming pool of sherry, we’ve started in the shallow end and now powering on to the deep end. 🙂
Palate is richer and thicker as we go, there’s still Tomatin lightness there to counteract the slightly heavier richer sherry.
There’s almost a sweetie note to this (boiled hard candies), which you don’t find in the matching mini sherry sample we had, the whisky is what’s bringing it out. Humm!
Defo getting the sweets… really interesting to find that its the whisky/malt bringing that out.
The thickish mouthfeel turns into a rich sweet fruit cake finish that lasts, going into malt.

A full gold colour. So we have to assume PX here right? (Of course it was!) Amazing how different the malt smells to the actual sherry. Humm!
It’s got that dark sherried warmth in both colour and nose, wintery, warming and very inviting. It’s interesting how light it is compared to the actual sherry which is much darker than I had imagined, thick as oil! There’s a rich malt note to the nose.
Going back to my previous analogy, this dram 4 is like jumping into the deep end of the sherry swimming pool, awesome stuff.
Thick and moreish on the palate and nicely smooth for the introduction, it’s sweet and malty with some wood in the background. The finish is similarly smooth, with a pinch of spices (which builds) and sweetness, it alternates between malt and sherry richness. A drop of water doesn’t go amiss with those spices.

Available: In Tomain’s shop, and in other whisky retailers any time now, prices around £50.

General Thoughts: What a great experiment / release by Tomatin. It’s nearly perfect, but there’s a part of me that wishes you could get the 4 releases in 20cl’s so that as a tasting experiment and learning exercise you could go through them all at a good price. To buy all four bottles is too much to do as a tasting exercise. However, all the releases are really interesting and give a fascinating insight into the different flavours the sherries impart. For me I really like the Fino, it’s light and summery. Also the other end of the spectrum, the PX with it’s thick sweetness works a treat for me… and the others in between are also great! What would I buy? I wish I could afford to buy all, I’m wavering between the Fino and the PX, the Fino winning! Well done Tomatin in releasing a really interesting range of limited bottles, grab em while you can!

Thanks to Tomatin for the samples. 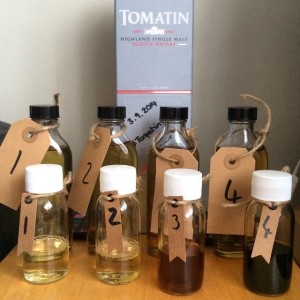 This entry was posted in News, Review, Whisky and tagged Tomatin. Bookmark the permalink.