Posted on 6 April 2016 by Steve Prentice

Exile Casks is a project from well known drinks writers Joel Harrison-Grier and Neil Ridley of Caskstrength Creative who have scoured many a whisky distiller’s warehouse to find rare “lost” casks which they have bottled and made available directly to the public at very reasonable prices. They kindly invited me to a Twitter tasting event, sending me ‘The Trojan’ (their first release) and an as-yet-to-be-named second dram. Let’s take a look… 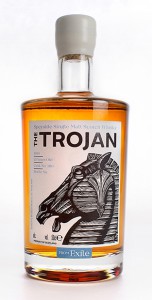 Info: The first release from Exile Casks. It’s from an unnamed distillery located within the Speyside region. Distilled in June 1990. Single cask, number 3110. 306 bottles. Refill hogshead.
Colour: Rich, slightly rusty, orangey gold.
Nose: A nice full nose, lots of spirit and alcohol giving you plenty of aromas to smell. There’s oak and varnish, with some glue. Hints of chocolate and brown sugar caramels / honeycomb, like a Cadbury’s Crunchie bar. With air it really starts to open up.
Palate: Fairly thick and oily, powerful with heat and spices, but it soon settles. There’s oak, and some fruits, almost gentle sherry type. A wee drop of water would probably be a good thing here.
Finish: There’s a barley dough quality along with small puffs of cask char. The finish with the oils is fairly long and stays on your palate for a good while.
Thoughts: An intense whisky, one that requires a bit of time (and a drop of water), but is very enjoyable quality stuff… for the price really quite amazing. It’s a whisky for drinking.
Available: Exile Casks – £65 for 50cl (i.e. £91 for 70cl).

Info: Exile Casks’ yet-to-be-released, and is as yet unnamed, second offering. It was distilled 9th April 1992, single cask number 1602, 200 litre refill American Sherry Butt.
Colour: A full golden straw colour.
Nose: A real nutty quality to this, it sometimes smells sweet and other times smells more bitter! Quite fun. There’s a digestive biscuit thing going on behind it all.
Palate: Thick and a little easier than Trojan. It’s got some sweetness, late summer fruits which then move out of the way to become spicy and a little bitter. Water softens.
Finish: Long, big puffs of cask smoke, fresh, a little tropical spiced. Enjoyable.
Thoughts: For me this was probably the more interesting and fun whisky of the two. This is thick, packed with flavour and really enjoyable. Another drinking whisky!
Available: Exile Casks – Not yet bottled / available.

Thanks to Exile Casks for the samples. 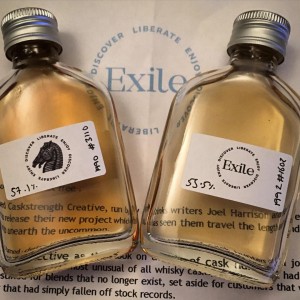 This entry was posted in News, Review, Whisky. Bookmark the permalink.