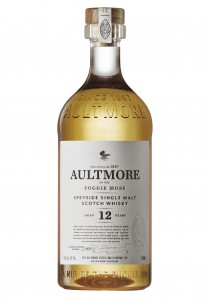 Back at the end of last year I was lucky enough to go around all of Dewar’s distilleries and I tried the 3 Aultmore’s at that point, you can read about my trip and my initial impressions here. However, below is my further thoughts / tasting notes now that the range has officially been launched.

However, first let’s have just a bit more of the official PR about the release, scroll to the bottom for my notes:

The new range of this ethereal single malt, never released by the distillery before, launches from January 2015 and will be available initially in 10 markets; a rare chance to savour a whisky shrouded in secrecy for over a century.

AULTMORE has been producing malt whisky since 1897, yet little is known about this obscure distillery. Often cloaked in thick fog and exuding an air of mystery, the sparsely populated land surrounding its site has always felt somewhat isolated. The distillery sits in the sweeping hills of Moray, just north of the town of Keith on the rolling road to Buckie.

It was built by Alexander Edward, close to curious terrain called the Foggie Moss. This enigmatic area, well known for illicit distillation in days gone by, is home to Aultmore’s water source. Damp, atmospheric conditions prevail here and the water, filtered through the gorse and heather that abounds, is crucial to the whisky’s light, clear character.

The Scotch itself is often dubbed the ‘Rarest of Speyside’, yet its taste has long been rated top-class by industry insiders and is much sought-after for its grassy notes and exceptional smoothness. Despite its rarity, for more than 100 years it’s known to have been a secret dram of locals and Buckie fishermen, savoured by those who knew to ask at nearby inns for ‘a nip of the Buckie Road’.

Stephen Marshall, Single Malts Global Marketing Manager, says: “Aultmore is elusive, mysterious and one of the easiest drinking drams around; I think Scotch lovers are going to really enjoy this one”.

Aultmore will be available from January with a 12-year-old, a 21-year-old in Travel Retail and a 25-year-old in limited quantities. It will be released initially in 10 markets around the world including Canada, France, Germany, Japan, Russia, Sweden, Taiwan, the United Kingdom, the United States and Travel Retail.

Now on to my notes… 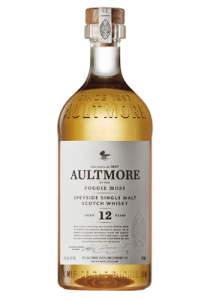 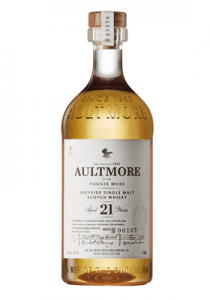 Colour: Full gold, slightly autumnal.
Nose: Traces of the 12 are there sure sure, there’s malt and ripe fruits, but there’s and aged depth with much more of a nuttyness to the nose. Quite dunnagey*.
Palate: Easily introduced into the mouth with fairly thick feeling malty sweetness. Minerals and oak interplay with the gently sweet malt.
Finish: Slow, pleasing and quite long, a slight struck match quality to it with a grassy barley lasting out.
Thoughts: The 12 is a good dram, this is a dram for later in an evening to enjoy slowly, lovely. 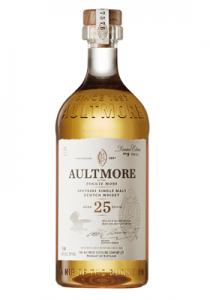 Colour: Similar to the 21, a sunny autumn gold.
Nose: Again, similar to the 21, just a touch older and more accomplished. Overripe fruits coming through.
Palate: Thicker than the 21yo, oily and mouth coating. Old barley, with a gentle fudgey quality and slightly more pronounced oak, although not overloaded. A quality bourbon oak note coming through with a floral lavender quality there as well. Lots of layers of flavour.
Finish: Long and full, the floral nature leading the way slowly melting into the bentle barley, minerals to finish.
Thoughts: A very accomplished dram with a multitude of levels of flavour. But is it worth the high asking price?

Overall Thoughts: Before I get into anything else I want to comment on the bottle design, I love it, it looks fab, well done to the team who designed it. Which dram do I like best? It’s a hard question, they all have good qualities… but as an everyday drinker the 12 is good, and the 21 is that bit more special. The 25 is exceptional, but so is the price, and as such I’d not consider buying it, although I’m very pleased to try it here!

* The smell of an old fashioned dunnage warehouse, an old earthen floored warehouse where casks rest for maturation.

Thanks to Aultmore for the samples. 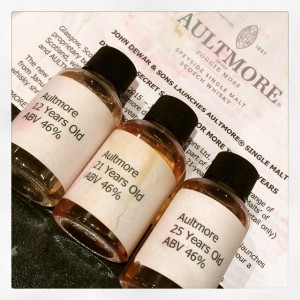 This entry was posted in News, PR, Review, Whisky and tagged Aultmore. Bookmark the permalink.