Posted on 12 February 2015 by Steve Prentice

Recently Glenmorangie launched Tùsail, the 6th release in their yearly Private Edition series of malts… most of which form some part of experimentation by Glenmo’s main man, Dr Bill Lumsden. (See below for my review tasting notes.)

This years experiment \ release is comprised of Maris Otter barley, floor-malted by hand, and non chill-filtered.

A rich winter variety of barley first introduced in 1965, Maris Otter was bred specifically to meet the demand for a high quality brewing malt and recognized for its ability to impart rich, rustic malty flavours. The variety at the time was much loved by brewers and created great ale’s, however the variety started to fall out of love and started being replaced with newer varieties that had greater alcohol yields until it was revived by a dedicated company and is now revered as one of the best malts for brewing once again.

I was lucky enough to be in London on the product launch evening, so I went along to Brown’s Hotel in Mayfair to join the many other industry folk who had been invited along.

We started off with a lovely cocktail or three made with Glenmorangie Original (10yo) and ginger ale, amongst other things… I was told by someone who knew better than me that it was basically an Old Fashioned but for younger folks. Either way, it was very enjoyable and refreshing… to the point where it nearly tempts me to try and recreate it, and I can’t usually be bothered with cocktails as you need to stock stuff, I don’t have room for stuff.

We then took a tour through various previous Private Edition releases… Brief notes taken from my tweets on the night:

Glenmorangie 10yr; distilled in the 70’s and bottled in the 80’s. Soft and silky, yet complex alike; lemon & honey. This old Glenmo 10yo is blumming good, defo a touch different from what’s in the shops now. 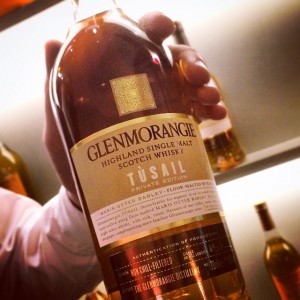 Throughout all the tastings Dr Bill talked us through all the various aspects of them. Focussing in on Tùsail he didn’t hide away from the fact that the barley variety isn’t actually entirely rare, it’s used fairly widely by brewers for ale… however as a winter variety it doesn’t grow very well in Scotland, and because of it’s low alcohol yield rate it basically is never used to make whisky, they couldn’t find any records of it’s use before, although no doubt it has been used. Dr Bill mentioned that there was just enough malt to do three runs through the stills, so everything that was produced has now been bottled.

So, I’ve talked about it, and even given you my quick notes from the evening above, but let’s take a more considered look at the release… here follows my notes…

Colour: Rich straw to light gold.
Nose: Rich and sweet with fairly ripe fruit tones, ripe banana, brown sugar and a slight earthiness.
Palate: Fairly full and oily in the mouth, with a gentle introduction. There’s spices, but not the hot sort, cinnamon and maybe some ginger. The bananayness (is that a word?) that I found on the nose and at the launch evening is still there, and I like it – it’s not dominating, but just a nice addition. There’s a slight toffee nature, maybe more condensed milk.
Finish: Fairly long and sweet with the occasional gentle puff of smoke, earthiness & oak.
Thoughts: I enjoyed it on the night, and I’m still enjoying it now! It might not be for all – and I’ve seen some reviews of people who aren’t bothered by it, but I liked it and I’m kind of tempted to buy a bottle for my self.
Available: In The Whisky Shop and other outlets soon, around £78.

Thanks to Glenmorangie for the invite and the sample. 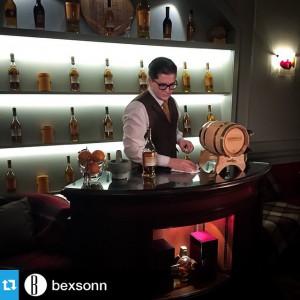