I’m off up to Glasgow tomorrow before heading over to Islay for the Feis on Friday… Therefore now seems the perfect time to review the 2016 Ardbeg Feis Ile release, Dark Cove. Something to do with olden times, pirates, coves, smuggling. Blah blah. Whisky.

There’s two versions, the stronger (55% abv) Committee Edition, and the regular (46.5% abv) version which will be released during the Feis. They did the same last year with the 2015 release, and in that case I preferred the lower strength version, so how will the 2016 versions compare? Let’s see…

Info: Dark Cove is made up of whisky matured in sherry casks, married with hallmark ex-bourbon Ardbeg
Colour: Ripe golden straw, slight rust tints.
Nose: Punchy, salty and peaty. It’s quite clean at first but very quickly backed up by fruits and berries along with bubblegum notes along with spices, both christmas spice and indian spice. With a little time the nose becomes slightly buttery and creamy.
Palate: The palate is fairly sweet, with a layer of moss followed by peat, coal tar, gentle spices and then late summer berry fruits, gooseberries and redcurrants. It’s fairly thick and luxurious.
Finish: The finish is quite fresh which then turns to peat, spices, some sweetness, but also sourness from tannins, not that it’s dry.
Thoughts: It’s a good Ardbeg, would you expect anything less? It’s RRP is £95.99, and I’m not totally convinced it’s of that value.

Info: As far as we know the info is the same as above, only it’s stronger. Is 55% cask strength? It might be.
Colour: The colour s similar to above, but it’s a little deeper, less diluted, so a richer golden; a late summer autumn evening.
Nose: The nose can be recognised from above, but it seems to have a much richer and deeper sherry influence, cinder toffee. The above dram has a more obvious bourbon background to it, this less so, it’s definitely dialled the sherry up a notch (in a good way).
Palate: The palate is easily introduced to your tongue considering the higher abv. It’s smooth, velvety and oily. Give it a moment to kick in and then the peat smoke comes forward intertwined with sweeter sherry notes, backed up by honeyed bourbon, less moss.
Finish: The finish is long, smoky, and smooth. Costal notes with a briny edge.
Thoughts: It’s a belter, but the peat may be easier than you expected. £85.99.

Overall Thoughts: In 2015 I preferred the lower strength version. In 2016 I prefer the higher strength version, it just packs more of a flavour punch and feels like it’s not been toned down. That said both are good drams and there’s not much in it, depending on mood it would be easy to come up with the other dram as a winner. They’re enjoyable, but they’re not really blowing my socks off, especially for the price. However, I quite like drams that don’t knock my socks off, because I like my socks.

Thanks to Ardbeg for the regular (46.5% abv) sample. The Dark Cove Committee sample was my own as part of a bottle share. 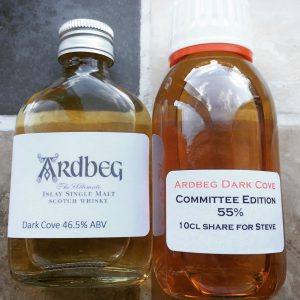 This entry was posted in Review, Whisky and tagged Ardbeg. Bookmark the permalink.