Review: Benromach 10yo and 15yo

A wee twitter tasting of Benromach is in the offing as I write this, and here’s my thoughts and tasting notes from the evening!

First a little info… Benromach has been making whisky since 1898 using spring water from the nearby Romach Hills. After being bought by Gordon & MacPhail in 1993, the Benromach Distillery was restored & reopened in 1998. Since reopening the distillery has gained a reputation for producing an innovative range of distinctive Speyside whiskies with pre-1960s character. Benromach uses locally grown barley which is malted with a little peat smoke.

On to my notes…

Info: Made with 80% Bourbon barrels, 20% Sherry hogshead. Final year spent in first fill Oloroso casks. Winner of Best Speyside Single Malt 12 Years & Under at the 2014 World Whiskies Awards.
Colour: Late summer gold.
Nose: Fairly sweet, slightly spirity, malty with mushed up apples and a sprinkle of nuts. The nose grows on you, it’s got quite a few layers of flavour to work through. Some spiced ginger flavours, touches of caramel and smoke.
Palate: The palate is fairly gentle on the introduction with spices gently building. There’s malty sweetness backed up by the gentle sweetness of the sherry, with the smoke puffs really showing up towards the end of the dram giving a spiced smoky kick.
Finish: A long and warming finish with the smoke kick and spice tickle really hanging around. Slight tannins keeping it a little dry.
Thoughts: A good entry level dram, of an older style that some may take a moment to adjust to. Nice to see an age statement whisky still around at affordable prices.
Available: The Green Welly Stop – £31 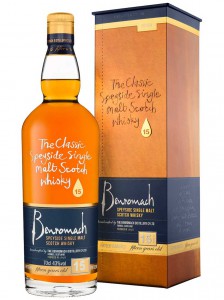 Info: Benromach 15 Years Old is the latest permanent addition to the distillery’s core range. As with the 10yr the 15yr is matured with both bourbon barrels & sherry casks, with the sherry being the more dominant part.
Colour: Autumnal gold, a little darker than the 10yo.
Nose: The nose is obviously similar to the 10yo, but it’s richer, deeper, with more of those sherry tones and nutty notes,  hints of hessian sack. Plums & custard.
Palate: Fairly thick feeling considering it’s 43%. Easy introduction, slight bitterness which goes straight into sweetness from the sherry. There’s ripe red and green apples mixed with a slight burnt brown sugar note and a puff of smoke, slightly less smoke than the 10yo. Marmalade orange maybe.
Finish: The 15 is a smoother, slightly less smokey and spicey finish than the 10, which I find enjoyable, it’s sweet to the end.
Thoughts: More accomplished dram over the 10yo, still classic in feel but maybe more accessible to my palate.
Available: The Green Welly Stop – £47.99

Overall Thoughts: Benromach has been fairly universally liked by reviewers for a while now, but this is the first time I’ve spent some proper time with it… I tried quite a few when visiting the distillery, but didn’t have the time I have had here to really compare. They’re fairly classic drams, old style you could say. They’re both accomplished whiskies that you should give a bit of time and space to… but for me the 15yo was clearly the better dram, at least in my mind I found it much more accessible.

Thanks to Benromach for the samples. 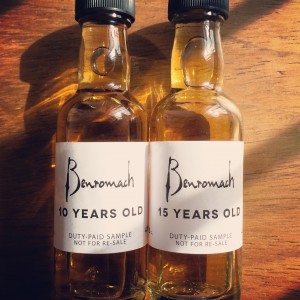 This entry was posted in Review, Whisky and tagged Benromach. Bookmark the permalink.