Posted on 3 December 2015 by Steve Prentice 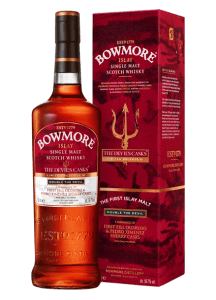 Info: “Double the Devil”, so the label says. Matured in first fill sherry casks; both Oloroso and Pedro Ximénez. The third and final release in the series. NAS.
Colour: Dark and rusty, mahogany.
Nose: A fair alcohol nip if you nose too strongly at first. Behind that is a creamy, fruity and lightly smoked malt, backed up by some slightly sappy oaky notes. With some warmth and a little time you get a milk chocolate tone and the smoke notes start to come out more strongly… It’s more smoke than peat with a salty, ozoney, coastal air background, reminiscent of Bowmore’s island location.
Palate: Lovely and thick on the palate; fruity malt covering your mouth nicely. It’s rich, nicely sweet and smokey. There’s a salty peated malt at the fore, but equally matched with christmas cake fruits, dark winter berries, blackcurrants and red berries at the fore.
Finish: The finish is fairly warm, gentle and subtle; it passes from your palate to your chest in a slow but steady movement. Right at the very end you get some slightly younger oak notes that poke their head up. There’s very little in the way of tannins to spoil enjoyment.
Thoughts: There doesn’t appear to be an age statement, however it doesn’t matter too much as the spirit is full of flavour and quality. I seem to remember batch 1 feeling a little hot and bull headed, whereas this seems more considered and enjoyable; it’s an absolute firecracker of a whisky, one for enjoying on a cold evening snuggled up in front of an open log fire. There’s been plenty of discussion on social media about the 171% price increase over the previous release, I won’t add anything more to that!
Available: Master of Malt – £190.

How does batch 2 and batch 3 compare?

I still have some batch 2 left, so let’s do a quick head to head. Batch 2 has more of a raw power to it, a bit less creamy, a little brighter. Batch 3 is slightly darker, the more oxidised PX sherry just giving it that little bit of extra depth. On the palate Batch 2 feels just that little bit more oaky and, similar to the nose, that little bit brighter and more straightforward with peat smoked malt and cask char. It’s full of summer and autumn fruits and fire embers. Batch 3 is that bit thicker with oils, the additional PX creaminess covering your palate with more wintery fruits and a hint of menthol mint somewhere right at the back. They both have lovely finishes. To pick between them is hard… Batch 2 is powerful and fabulous. Batch 3 is similarly grand, but a bit more wintery and relaxed maybe. Which would I pick? Tonight, because of the extra oiliness, it would be the Batch 3, it’s great stuff. Bowmore really have saved the best till last, and if the first experiment with PX casks is anything to go by then it’s a complete win, and something Bowmore needs to investigate further (I’m sure they will!).

Thanks to Bowmore for the sample. 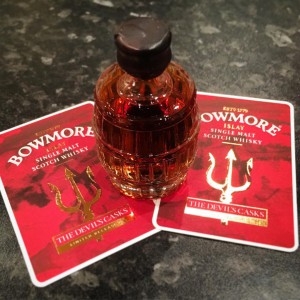 This entry was posted in Review, Whisky and tagged Bowmore. Bookmark the permalink.