Back in March I had the good fortune to bump in to, and spend some time with Allison Patel, the owner of Brenne whisky. She’s an awe inspiring lady who’s brand is building into a great set of releases, the newest of which is the 10 Year Old. It’s handy for me that she let me have some samples, because it’s nearly impossible to get in the UK (although the original Estate Cask – reviewed by me here – is now available at Master of Malt).

Before moving on to trying the 10yo, let me refresh my memory with a re-review of the Estate Cask – NAS – release…

Nose: Really sweet, think boiled fruit sweets or jelly fruit sweets like Jelly Babies, with a slightly metallic barley after smell (as it were), and a hint of something medicinal. Personally I rather like it!

Palate: It’s easy going on the palate with those jelly sweet notes easily coming through with a hint of spices too. There’s hints of toffee apples, boiled sweets and jam conserves.

Finish: The finish is kind of fresher than expected with the medicinal note from the nose returning a little. The spices linger for a while, although the rest of the finish is fairly short.

Thoughts: It’s a sweet treat which I rather like, although possibly not everyone would.

Nose: A much more restrained and mature nose than the NAS version, less overt sweetness. There’s much more of a metallic edge to the nose which I guess is coming from the longer maturation in Cognac casks.

Palate: The palate sparkles a little bit, with a much more rounded and mature feel than the NAS. There’s spices which are quite up at the front and stay around nicely. There’s a balanced sweetness, but not the overt sweetness of the NAS, this has a much more traditional feel to it. There’s a slight acetate note at the back.

Finish: There’s a slightly nutty hint with spices and some sweetness, all of which stick around for a fairly long time.

Thoughts: It’s quite a different kettle of fish to the NAS version, not the jelly fruit sweetness, but a more mature and gentle sweetness with a twist from the Cognac that makes it interesting and different. I like Somerset Cider Brandy, and I can really detect some similarities going on here.

Thanks to Allison at Brenne for the samples. 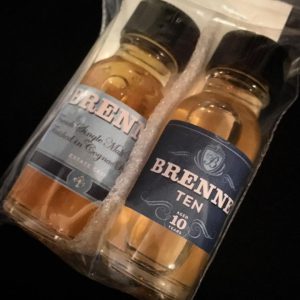 This entry was posted in Review, Whisky and tagged Brenne. Bookmark the permalink.