Posted on 30 December 2014 by Steve Prentice 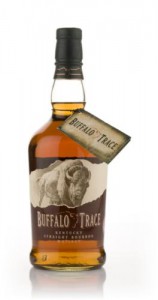 Info: The 45% abv version that’s in review here is sadly not so easy to find any more, it was replaced with the lower 40% version that’s now generally available in the UK. You can take the following as a basis for that 40%, but expect it to be a slight shadow of this version.
Further Info: The 45% version was first introduced in 1999 and is a marriage of no more than 45 barrels of 9 year old whiskey and is bottled by hand.
Nose: Powerful, slightly spirity as if the abv were higher. Packed with interesting flavours. Brown sugar sweetness (kind of rummy), spicy rye and corn goodness… Rich, inviting and fun.
Palate: Fairly thick, quite spicy and gently sweet. Packed with flavour.
Finish: Winter spiced sweetness, slightly floral, coconut, rich and long. Corn flavour wins out and sticks around for ages, my least favourite part but that’s only because I’m not a big fan of corn flavoured whiskey (I perfer malt!).
Thoughts: I still fight against bourbon, I’m a Scotch whisky guy… but this is evidently a damn fine whiskey with lots of flavours to explore, enjoy and appreciate… Don’t spoil it with coke.
Extras: Made from Kentucky and Indiana corn, selected rye, and superior malted barley, all bourbon produced by Buffalo Trace Distillery is aged in century-old warehouses. Constructed of massive wood beams and covered by a brick shell, these structures allow the alternating cooling and warming of Kentucky’s four distinct seasons to mature the bourbon by nature’s timetable. Steam pumped throughout the warehouses during the extreme cold of winter compensates for the dramatic drops in temperature and gives the whiskey additional cycles in and out of the wood. This is said to make for a more balanced bourbon as the liquid is able to take additional advantage of the natural sugars occurring in the charred barrels. The distillery was the first to use this method of aging in 1859 and has been doing so ever since.
Available: Master of Malt (40% version) £23.83. Drink Supermarket (45% version) £29.50. (Also the 45% version is still available on Amazon UK at time of publishing).

This entry was posted in Review, Whisky and tagged Buffalo Trace. Bookmark the permalink.