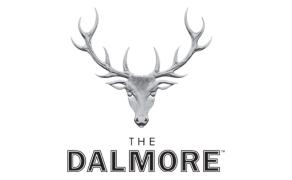 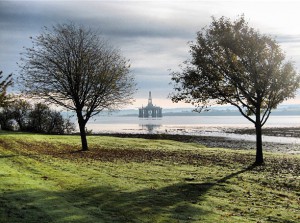 View from Dalmore out over the Cromarty Firth in Autumn

But what does the Clan Mackenzie have to do with The Dalmore? The story says that back in 1263 Colin of Kintail, Chief of the clan Mackenzie, saved King Alexander III of Scotland from a charging stag. As a reward Colin was granted (amongst other things) the right to use the 12-pointed Royal Stag as the Mackenzie clan crest. Scroll forward some years and in 1839 the entrepreneur Alexander Matheson establishes The Dalmore distillery, which after some time he sells on to Andrew and Charles Mackenzie. As members of the clan Mackenzie they brought with them the iconic 12-pointed Royal Stag emblem which has been used ever since and is found on their bottles of whisky to this day. 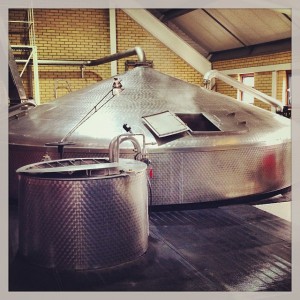 Before dinner we take a quick private spin around the distillery with Stuart the Distillery Manager, although before starting the tour we are asked to leave our mobiles in the Distillery shop in what seems to be the tightest “health and safety” policy I’ve yet found in over 55 tours (pictures in this article were taken sneakily on a previous visit and the world didn’t end). While touring we discuss what barley the distillery is currently using for it’s process and the fact that a bad summer in Scotland means they’ll most likely have to start sourcing barley from further afield very soon to make up for the shortfall. We take a look at the 48 hour ferment, much shorter than many distilleries… The reason? To keep the character that Dalmore has, a longer ferment would change that. 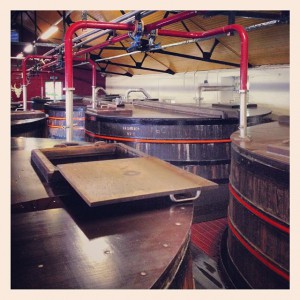 We also take a look at the various “unusual” stills… on one side some stills that are much smaller than the matching but much larger stills on the other side of the room. They have a fairly unique system of cooling sleeves around the neck of the stills to help condense the spirit inside the still before it’s even reached the lyne arm and more regular condensers (even if some of them are horizontal rather than vertical, which is the norm). It’s a 24 hour a day process, 7 days a week, using liquid yeast.

After the tour we get to spend some time with Richard Paterson while we wait the Clan Mackenzie folk to turn up. While sipping on Dalmore 15yo we get some time to talk with Richard who confirms that Dalmore’s new owners are being very supportive and have helped them expand into the Far East. 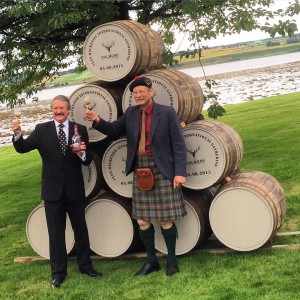 They’re supporting an expansion of the brands wood policy which is an area close to Richard’s heart, in his words the “cask is king” and he says that there are many expressions coming that will highlight the various cask influences. They’ve been able to invest well over the last few years into the cask side of the business, ensuring that good contracts are in place for future supply.

We talk to Richard about non age statement releases to get his opinion, and unsurprisingly he suggests that, for example, a 12yo bottle won’t necessarily contain the best whisky. He argues that it’s really down to brands trust and reputation so that someone like himself, a Master Distiller or blender, is able to put the best whisky into a bottle and for people to trust that it’s the best… much of that comes down to the marketing side of things to ensure people are comfortable with what they’re buying. There’s great examples of good NAS whiskies, Richard points us to King Alexander III which is a NAS release containing Port matured whisky that can take 6 years to get to the flavour he wants, and sometimes 8 years, depending on the cask and how active it is. Sometimes it can take as little as 18 months for something like a Cabernet Sauvignon because the casks are so active, and sometimes longer. As a blender Richard says he’ll only release the whiskies when the assemblage of whisky is correct and the flavours are as he wants, so therefore an age statement is a difficult thing to have in that situation. 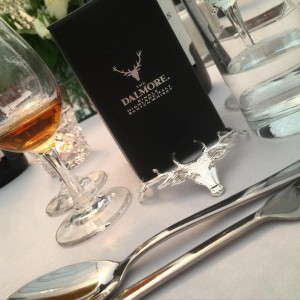 We finish up our drams and move into a marquay with the Cromarty Firth as backdrop to take our seats for dinner, during which Richard shows his well known flare for speech giving, passionately regaling us with interesting historical stories while plying us with Dalmore Valour, 18yo, King Alexander III, Cigar Malt and finally some 25yo cask strength, which was a taster of a release yet to come, and very nice it was too; a fairly sprightly tasting dram despite its age, finished for 4 years in special Claret casks. All these were matched perfectly with food pairings specially prepared for the evening including haggis neeps and tatties, a salmon fish course and a chocolate torte.

Through the day we tried various expressions from The Dalmore… Some were excellent, King Alexander III is a great dram, as is the 25yo going to be when released. However if I was to pick a favourite from the day, it would be the 15yo… A tasty and easy to drink dram which, for me represents value for money over some of the more expensive drams in the range. 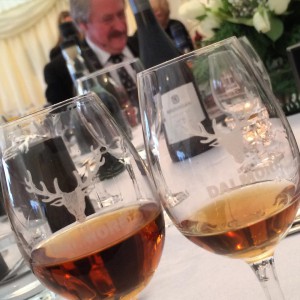 At this point we retired back to Inverness into the warm embrace of a pint or two in Hootananny, but that’s a story for another day.

My thanks to The Dalmore for inviting me along to the event, I was (and still am) honoured to have been able to spend they day with you and Clan Mackenzie. 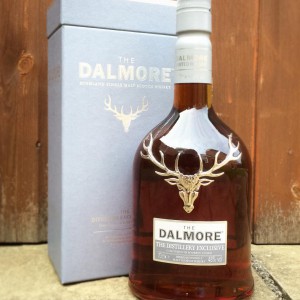 Info: A mix of port, Moscatel and Madeira casks which were then finessed in first fill bourbon barrels. No age statement. 450 bottles. 48% abv.
Colour: The dark autumnal orange you may come to expect from Dalmore and it’s casks.
Nose: Both sprightly and mature at the same time, packed with nuts and oranges; seville orange marmalade, raisins, hints of chocolate and some younger oak notes.
Palate: A nice thick feeling on your tongue that builds a fair amount of spices quite quickly. It’s a rich and varied dram, sweet and punchy. It’s got a slight earthy note.
Finish: The finish reduces down quite quickly, but what you’re left with hangs around for a long time on your palate… Some younger oak notes and cask char last out to the end along with a pinch of spice and some of the juicy raisin fruits.
Water: For me, a small touch of water works well. It reduces the spice down a little, while letting some of the sweeter side of the dram come out, it’s easier to drink.
Thoughts: It’s a punchy dram that a Dalmore lover would really enjoy. However if you’re less of a seasoned Dalmore drinker then you may want to start further down the range with something like the 15yo.
Available: Can only be purchased at the Distillery shop, £150. This year’s stock is nearly all sold… there will be a new batch for 2016.

Many thanks to The Dalmore for the sample and the dinner invite. 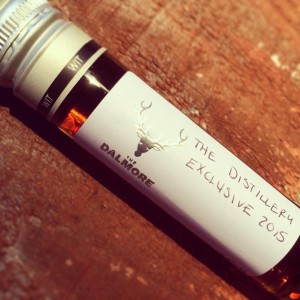 This entry was posted in Fun, Review, Whisky and tagged Dalmore. Bookmark the permalink.