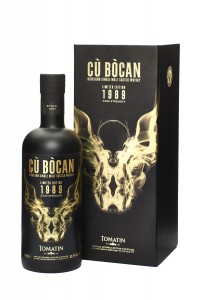 Review below, but first for a quick bit of info…

Tomatin have announced the launch of a Cù Bòcan 1989 vintage limited edition.

A rare bottling from a vatting of three casks (37470, 37471 and 37472) which have been lurking quietly in Warehouse 9 at Tomatin Distillery since a rare and unintentional production of peated whisky at the distillery on 7th June 1989.

Released at cask strength, non chill filtered and natural colour. The smoke is more prominent than in the standard edition but retains the instantly recognisable sweetness.

Let’s take a look at the whisky…

So, this is over 24 years old, a good age! As many followers might know I’ve quite fond spot for Tomatin whiskies… they’re excellent quality and generally well priced. A distillery that’s maybe not that well know compared to some, but that’s a good thing for a whisky fan like myself because it means they have to try that bit harder for your business, and they do a great job of that, it’s a friendly place (and quite a massive place at that!) producing great whisky. As the blurb above states, their whisky is generally unpeated, so this is a bit of a treat for us that’s for sure.

Nose: Fragrant and slightly floral malt quickly comes out of the glass, peat doesn’t necessarily hit you, but there’s a good smokiness to the dram. There’s a definite citrus note to things, with gentle oakiness.

Palate: Quite smooth for a dram at this ABV (because of it’s mellow older age), but that soon becomes quite tingly, sherberty almost, think Refresher sweets. The peat smoke here is restrained but very present, it’s light and enjoyable. There’s a gentle citrus fruity sweetness which then creeps in, along with just the smallest hint of farmy notes.

Finish: Fresh and fairly long, the smoke dies back after a while leaving fairly sweet old malt, hints of hay and slight oak notes on your palate.

Water: Doesn’t really need any, only add a small amount as it’s fairly old and you don’t want to ruin it. However if you do add it, green apple notes come forward on the nose which is rather nice. On the palate it’s still fairly fizzy which is great and maybe brings forward the malt notes even more.

Thoughts: A very enjoyable, older and lightly peated whisky, a top drop of whisky that goes down well in by book. It’s fairly expensive, but it’s hard to blame Tomatin too much, it’s cheaper than most other distillery bottlings of a similar age that go for over £200. You’re paying for something that’s a little special, and it is cask strength too.

Want a second opinion? Check out my mate Jon’s blog at Scotch & Sci-Fi for his review.

Thanks to Tomatin for the sample… I’ll be getting a bottle!

This entry was posted in Review, Whisky and tagged Cù Bòcan, Tomatin. Bookmark the permalink.