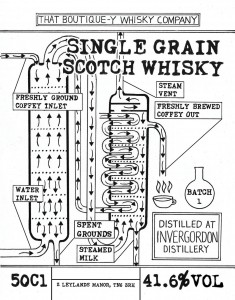 A wee while ago (back in April 2013) I was pleased to be able to take part in a blind tasting on Twitter of four different grain whiskies, hosted by The Whisky Wire, and provided by Arkwrights Whisky & Wines, my (best) local whisky shop, which is still nearly a two hour drive away, booo. See below for my notes on the four whiskies, which turned out to be… Cameron Brig, Greenore, Nikka Coffey and Invergordon.

This single grain whisky was distilled at the Cameronbridge distillery in Fife. A very light, gentle whisky.

Light straw in colour. On the nose this is light, grainy with vanilla summer fruits and bourbon influence.

On the palate it’s just as light as the nose; very easy drinking, subtle and summery with a reasonable mouthfeel. The grains are nicely balanced, it’s not too heavy on corn notes which some grans can be, and which for me I’m not usually too keen on… that’s not the case here, this is a really quaffable whisky!

The finish is fairly short, with a fruity sweetness, a gentle hug of warmth on your chest and just a pinch of peppery spice.

Very much an early evening starting dram on a summers evening, very well priced. I imagine this would take ice without too much trouble to make it even more summery. This isn’t some multi-layered thing you need to spend ages with, just drink it and enjoy. If you’re looking to spend 20 quid on a whisky, then why not give this a go rather than some cheap blended whisky. Score wise, a more than reasonable mid 80’s.

Light straw in colour. A really oily start to the nose, the kind of oils you would smell in a metal workers workshop. For me not a nose I warm to much, but under it is a sweetness with a hint of cereal grans and a touch of oak, and with more time the oil clears a little allowing a more floral note to escape, it begins to be much nicer!

On the palate the oils on the nose translate into actually quite a nice thick mouthfeel which is great, although it’s light and easy drinking, it’s just that little bit more intense with a little more spices and cereal malt… thankfully it’s much more engaging and pleasant than the nose might suggest. There’s floral vanilla and oak notes all combined with an oily background.

The finish is medium in length, and actually quite long in your mouth which is still well coated in slightly spicy oils.

When I first had this on the Twitter tasting it wasn’t for me. On revisiting it for this review I’m actually now finding I like it a lot more than I remember… I still don’t overly get on the with the nose, but the palate and finish are quite engaging and enjoyable. I can imagine this would go well as a late summer dram with an early evening meal of BBQd corn on the cob with lots of butter. However I wouldn’t buy a bottle, better out there to be had! 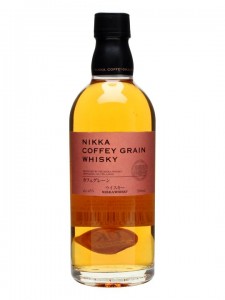 Nikka runs two Coffey stills within the Miyagikyo Distillery which were imported from Scotland in 1963. Nikka Coffey: Distilled mainly from corn in a Coffey still, which takes its name from its inventor Aeneas Coffey.

Light gold in colour, akin to many a good Malt Whisky. This has a nose which kind of seems familiar, again you could almost be forgiven for thinking it was a Malt. It’s robust and interesting, grains nicely balanced, buttery vanilla and gentle oaks with some more cream and gentle sweetness. It smells of quality!

On the palate you get a light but full mouthcoating that if held on the tongue becomes fairly spicy. The higher ABV really benefits the dram from the extra kick it gives you, but it’s still very smooth to drink.

The finish is fairly medium in length; the nature of grain whiskies are they they’ll never quite have the length of a good Malt, but this dram is certainly trying, you get a warming chest hug, some spices left in your mouth and throat, and a general feeling of happiness.

A few times for this review I’ve mentioned the similarities with a Malt, this probably has to do with great production values and good wood policy, whatever it is, it makes for a really good dram. This is definitely a step up into an evening dram, even if still light, and for me it’s a total star for its price.

Available from The Whisky Exchange for £36.45. 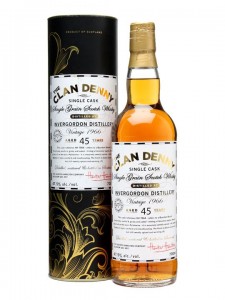 Full gold in colour. On the nose there’s just a tickle of smoke, which is probably from the long maturation in a charred cask. There’s an old leathery sweetness from this grain, vanilla fudge and a subtle but constant old hessian oakiness.

On the palate is a mossy damp oaky surprise, it’s a total step up from the others in age and quality. The smoke is most definitely still there for me, even if it’s just cask char it adds a wonderful extra dimension to this granddaddy of a whisky. There’s plenty of sweetness to offset the musty damp dunnage warehouse taste; both the gentle sweetness and oaky mustiness mix to form a totally delicious combination. There’s vanilla fudge sweetness, but not to the extent where it becomes dominated by that sweetness, it’s all in perfect harmony.

The finish is medium to long in length, warming on the chest, due to the age and the slightly higher ABV. There’s very gentle spices alongside the slightly vanilla fudge sweet oils.

This is a dram to end a night on for sure, it’s supreme. As soon as I found out that this sample was Invergordon I had high hopes as I’ve not had a bad one yet (let’s be straight, it’s my favourite grain distillery so far), but this totally surpassed my hopes in every way and I grabbed a bottle of it quick… where in the Malt world can you get a 45yo whisky for that price? This was true during the Twitter tasting and holds true now I’ve spent more time re-reviewing it. Awesomeness. Your glass once left has a slight candyfloss and sugar coated nuts whiff to it.

Available from The Whisky Exchange for £128.00. 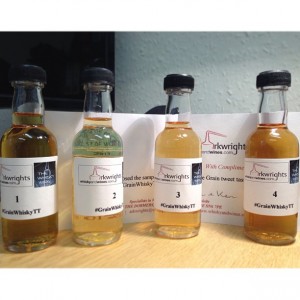