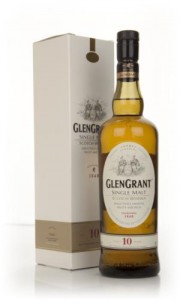 The whisky distillery was founded in 1840 by brothers John and James Grant. In 1872, James Grant died and the distillery was passed down to his son, Major James Grant. He then built a second distillery across the road, joined by a whisky pipe which transported the new make spirit. Glen Grant No. 2, as it was first known, was completed in 1897, but just five years later it was closed, reopening in 1965, under the name Caperdonich then again closed and now demolished.

Read on for my review…

Nose: A fairly classic Speyside type of nose to this whisky. There’s a (non peated) gentle malty sweetness, and a surprisingly good amount of old musty oakiness which reminds you of dunnage warehouses with their soil floors. Also hints of espresso coffee and a touch of dark chocolate. There’s a nice honey note to it that comes through even more as the oak notes fade away with time.

Palate: Smooth and honeyed barley sweetness with a light to medium mouthfeel and the smallest pinch of spices. It’s all very nicely balanced with a few nuts thrown in for good measure.

Finish: Gently warming on your chest with a slight tannin sourness working alongside the sweetness to keep things interesting. Considering the gentleness of the whisky the finish sticks around for a fair while.

Thoughts: As an entry level dram this is a classic and balanced speysider with a good amount of quality to it. Brilliant value for money and a fab one to share with friends at the start of the evening.

Thanks to Glen Grant for the sample. 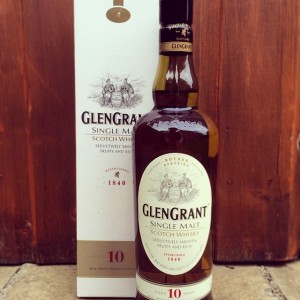 This entry was posted in Review, Whisky and tagged Glen Grant. Bookmark the permalink.