Posted on 9 August 2016 by Steve Prentice I don’t know that much about rums to be honest with you, but I do know that sometimes they make a nice alternative drop of drammage to whiskies.

I know I like Appleton Estate rums, via previous twitter tastings… but recently I was lucky enough to be invited along to a twitter tasting of Gosling’s offerings, and very happy I was to be able to check them out. The rums come with various stories and names which I’ll skip over right now, and get straight on to the good stuff…

Blend of various rums between three and six years old. Once called Old Rum, then renamed to Black Seal (because of wax bottle seal).
I don’t know if it’s its dark colour, but it smells deep and colourful (and I know colouring has been added, so it may be all in the mind!). Real packed caramelly flavours, dark melted sugars, chocolate and toffee along with cooked fruits and christmas cake. On the palate it’s really got spices and christmas cake notes up front, it’s thick and moorish. There’s a nice slightly spiced and sweet long ending, with a touch of bitterness at the back. Top stuff, very affordable, good rum.

A blend of Pot and Column still rums between three and five years old, using a different barrel mix to Black Seal. The Gold Seal was introduced to the UK market early in 2016 to compliment Black Seal. There’s a real butterscotch creaminess to the nose, totally different to the last one but still completely rummy and yummy. The palate in a similar way feels thick and creamy, packed full of vanilla flavours, almost like custard. Sweet, and softly spiced, gentle hints of oak in the background. Hot banana in butter sauce with chantilly cream on the top. The finish feels just a little more spirity, but long and warming, sweet and enjoyable. For me, I can’t get enough of the flavour profile here, it’s a great session drinking rum for sure, properly yummy.
Available: In shops soon.
Note: Not to be confused with the old Gold Rum with a different label! 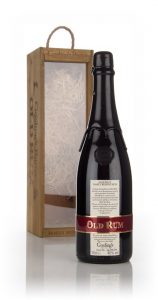 The “Old Rum” Family Reserve is only released in relatively small batches (27000 worldwide) every year, and is much more equatable to a sipping single malt whisky. It contains a blend of rums that are between sixteen and twenty one years old. It’s hugely dark in colour (who knows how much caramel is or isn’t used), and the nose matches the depth of colour with a depth of flavours that instantly hit you; many more old dunnage oak type smells that you might recognise from a well aged single malt. There’s a gentle less overt sweetness with plenty of herbal notes, coffee grouts, coconut and cola cubes. The palate is thick and very easy (a little more abv would be nice for something that’s more ‘premium’); the age, herbal tones and oak all showing up beautifully. The finish is warming, long and a little spiced, gently sweet and very moorish. Dryer than the two above, with nice morello cherry notes. It’s a fabulous rum that easily goes head to head with a good single malt of a higher price, you should buy some!
Available: Master of Malt – £49.87

Last, but not least, Gosling’s sent me a can of their very own Ginger Beer…. that, with lots of ice, plenty of Black Seal and a slice of lime makes for a great refreshing rummy cocktail, which they call a “Dark ‘n’ Stormy”!

As with some whiskies, it was interesting to find out that caramel colouring is used in a similar way, for batch consistency, etc. However, also we learnt that the colour comes majoritively from traditionally washing molasses back into one of the rums in the blend.

Thanks to Gosling’s and TheFloatingRumShack for the goodies. 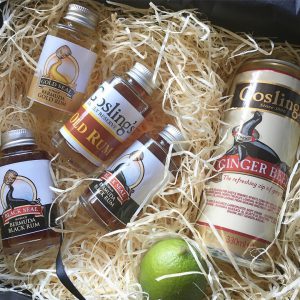 This entry was posted in Review, Rum and tagged Rum. Bookmark the permalink.