Update: 12,000 bottles were released worldwide. Finished in Palomino Fino, Amoroso Oloroso and Apostoles Oloroso Sherry casks.
Info: The following information is rumored, unverified and not confirmed by Jura… Combining Jura 19 year old seasoned for 5 years in an 11 year old Palomino Fino sherry cask, Jura 14 year old seasoned for 4 years in a 15 year old Oloroso Amoroso sherry cask, and Jura 15 year old seasoned for 3 years in a 30 year old Oloroso Apostoles sherry cask. Released for Feis Ile 2016.
Colour: Rich golden, gentle orangey tints.
Nose: Malty and sweet, packed with punchy, rich sherry fruit flavours, yet undeniably still Jura underneath. There’s cream and vanilla notes along side more regular nutty tones you find in sherried whiskies.
Palate: Nice and thick and rich with oils, some spices for sure, in fact at first it’s quite hot with the high abv. There’s baked apples with brown sugar, less creaminess on the palate than on the nose.
Finish: Very warming on your chest (showing the older age), sweet, long and moorish. Kind of leaves a tingle on your tongue. Not too much spice or tannin to ruin it.
Water: The strength and oiliness leads this dram to take water easily, it makes it more accessible, takes out some of the heat and allows the sweetness out nicely, showing some more delicate sherry flavours. It works for me, but don’t drown it.
Thoughts: Some people love Jura, some people hate Jura. If you’re in either camp then give this a try, it’s not your usual Jura, it’s far better than the standard 10yo and worth a try for sure, the triple sherry giving this a really smooth and interesting sherry influence with the Oloroso winning out on a long finish.
Available: Master of Malt – £84.95

Thanks for Jura for sending me the sample! 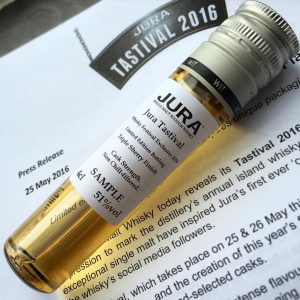 This entry was posted in Review, Whisky and tagged Jura. Bookmark the permalink.