Palate: Quite spicy, a touch hot at first but soon settles into being full and creamy on the plate. There’s some nuttiness and definitely some herbal notes.

Finish: Clean and woody with nettles almost giving a prickle, but in a good way. It’s long and sweet with a drop of tar and a background saltiness and ozone.

Water: Water reduces the spices a wee bit and makes it just that little easier to drink.

Thoughts: As ever Kilchoman is the perfect example of a small distillery doing great things and producing a quality product. I’m a fan of sherry and peat when it’s done correctly, and this has been done just fine! Give it a whirl and support the small distillers out there.

The 2013 Loch Gorm could be described as a sunset gold in colour, whereas the 2014 is much lighter side by side – different type of sherry maybe or a second fill cask possibly. The nose between the two is actually fairly consistent, the 2014 being slightly more spicy and earthy, the 2013 a touch sweeter and nuttier. On the palate the 2013 is somewhat easier, a bit less spice and a little more fudgey / stewed fruit sweetness. These releases are small batch, they’re supposed to be different, and these certainly do have some small differences. If I was faced with two bottles in a shop which would I go for? The 2013 pips it for me, but that’s not to say the 2014 isn’t also great stuff. 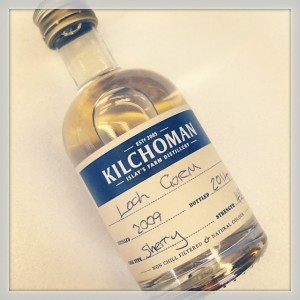 This entry was posted in Review, Whisky and tagged Kilchoman. Bookmark the permalink.