Posted on 28 November 2016 by Steve Prentice

Info: Lagavulin 25 Year Old (200th Anniversary) was released in 2016 as part of the celebrations for the distillery’s anniversary, and lists all the managers over that time on the bottle. It’s aged exclusively in Sherry casks, and released at cask strength. 8000 bottles worldwide.

Nose: Powerful, rich, deep, and lively. There’s deep chocolaty raisin notes amongst spadefuls of rich smoked fruitcake (Why can’t I get one of those? That’d be amazing!). The peat is very much tamed here, to more of a relaxing evening ember of a dying fire by the sea. Sweet cured bacon notes pop out at you. Old waxed antique oak in the background.

Palate: Massively thick and oily, it’s surprisingly easy going and smooth, although the Sherry oak spices start to build soon enough. There’s sweet fruitcake notes, but also an underlying freshness too. After all the years of aging there are still glorious malty tones all over your palate which soon show a slow and respectful peaty smokiness underlining everything. There’s almost a rich tingle on your tongue.

Finish: The finish is all about balanced sweetness and savoury, there’s hints of bacon and syrup along with gentle heathery smoke. The coastal influence at this point fairly minimal, with just a slight saltiness at the end. No tannin overload here, and no spice overload either, just what I like… could it be any better?! Probably not! Some slight coal embers and a hint of oak at the end.

Thoughts: I’m currently reviewing this whilst sat in the warm listening to rain lashing against the window, exactly the sort of weather that this dram is made for. It’s an absolutely banging whisky, probably about as fine as you’re ever going to get. Most of my malty mates know I’m a big Lagavulin fan, and this is why, because it’s bloody awesome. Peat and Sherry done properly can be a truly awe inspiring mix for whisky, and this is one such dram. It’s a premium price for a premium whisky, but hey, it sold so quickly that it hardly even hit the shops, that probably says it all.

Massive thanks to Lagavulin for the sample, I’m truly grateful as it’s hard to get to any tastings from where I’m based so I’d likely never have tasted this without your generosity. 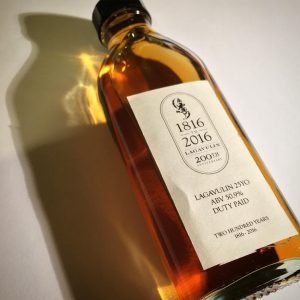 This entry was posted in Review, Whisky and tagged Lagavulin. Bookmark the permalink.