Posted on 7 April 2016 by Steve Prentice 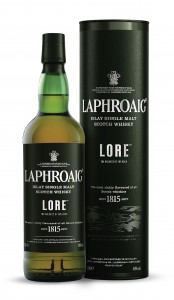 Info: Crafted by Laphroaig Distillery Manager John Campbell, Lore combines a number of casks including first-fill Bourbon barrels, quarter casks and Oloroso Sherry hogsheads. Campbell has said that Laphroaig Lore is a mixture of 7 to 21 year old liquids with 3 more ages in between them.

Nose: A very relaxing and familiar Islay peat nose meets you, it’s not totally in your face, it’s relaxed and restrained, but very much there at the front. There’s hints of the TCP iodine notes that you might expect, those sticking plaster smells you might be looking for, but there’s also plenty more going on which, for me, is so much more interesting… there’s smoked bbq’d bacon notes, young virgin oak notes and a milky creaminess, along with sweet caramels. There’s also old costal notes, think sea breeze through a harbour full of boats with old salt encrusted ropes. I really really like the nose on this, you can keep smelling it for ages. There’s definitely a well balanced meeting of young and old whiskies here. Hints of coal.

Palate: Thick, oily and mossy, perfect stuff. The strength is fantastic, it’s not too strong as to make it hot on your tongue, but it’s high enough to make it packed with flavour, with oil and with fabulousness. The first thing I get is mossy old dunnage type peat on your tongue, which I find instantly relaxing. That’s followed up by those BBQ bacon flavours along with the virgin oak type notes. Behind everything there’s very gentle, yet ever present coastal iodine notes that Laphroaig is famous for, but it’s so gentle you can’t help but love it and find it backing up everything else in a perfect and subtle balance.

Finish: On the finish, amongst all the other flavours mentioned above, you find a real creaminess and milk chocolate. There’s barley, possibly from the younger malt in this blend, but there’s also the gentle but deeply warming hugs that older malt gives you.

Thoughts: I’ve written more than usual for this review, and I’ve kind of already given you my thoughts above. However to summarize, I’m in love with this, it’s sweet, musty, mossy, peaty, old and easy yet with youthful distillery character. NAS can get a bad name, but this particular one gets my total seal of approval. It’s massively drinkable and enjoyable, the posh end of a session whisky, i.e. it’s not the most complex thing ever, but drinkingwise it’s definitely a winner to sit and crack on with.

Extra: It’s kind of a shame that Laphroaig and Beam Suntory (it’s parent company) are of a size where they won’t really weigh into the debate on NAS and the ability to publish what ages are in a NAS blend… By law age stated whiskies have to state the youngest whisky in the blend… Lore is no cheap trick NAS blend, but assuming it has some young whisky in it then that would be why they don’t state 7yo (for example) on it, because there’s plenty of older whisky in it too. It’d be great if it actually said exactly what ages were used, and their percentage that was in the blend so that consumers were fully aware of what they’re paying for. Compass Box are now trying to highlight silly EU-wide laws that prevent this information reaching us all via their transparency campaign (have a read, it’s good stuff!).

Even more: I’ve said it’s a blend quite a few times, I don’t mean blended whisky like Famous Grouse or some such that contains lots of malts and grains, I mean it’s a blend of Laphroaig spirits of different ages that form a recipe for the final product, a single malt.

Thanks to Laphroaig for the sample. 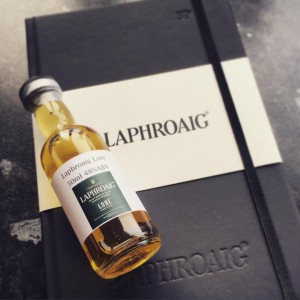 This entry was posted in Review, Whisky and tagged Laphroaig. Bookmark the permalink.