Wemyss released five new single casks in April ’14, for details head here. However, on to the review of another one of those releases…

Nose: That Auchentoshan farminess (I have no better description!) I often find is here, but not too strongly. It’s malty, light and zesty, and a definite lemony hint.

Palate: A slight upfront spiciness, which then dies off to be more gentle at which point the lemony zesty thing comes through.

Water: Reduces the spices and smooths it further, as well as upping the sweetness a touch. Works for me.

Thoughts: One of the better Auchies I’ve had the pleasure to try, very drinkable! If I could only buy one of the two new releases I’ve tried? Well that’s in the eye of beholder, depends what you like! For me if pushed I’d get the Bunna, only because I likes my peat. Saying that, this is also well worth your attention!

Thanks to Wemyss for the sample. 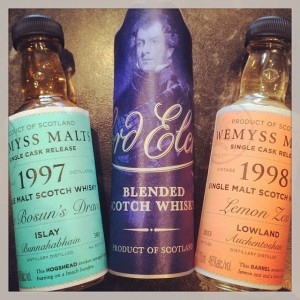 This entry was posted in Review, Whisky and tagged Auchentoshan, Wemyss. Bookmark the permalink.