Posted on 21 November 2013 by Steve Prentice

I recently reviewed and Inchmurrin which is produced by the same distillery as todays review, Loch Lomond. So without further ado let’s take a look at Master of Malt / That Boutique-y Whisky Company – Loch Lomond – TBWC Batch 1, 52.4%.

Colour: Full gold. Nose: A nose that seems familiar, but odd, chemically. It’s a grain whisky so it has quite a different nose to a single malt, there’s spices and something really fresh about it amongst creaminess.
Palate: Hot and spicy, this is one whisky that gives you a kick. The palate has parallels with the nose but is sweeter and less chemically than you’d imagine, it’s actually quite nice, gingery and fiery.
Finish: A little smoother than you’d imagine from the palate, it’s very warming, but good. Medium in length.
Thoughts: Like with the Inchmurrin this also comes from Loch Lomond distillery, although this is a single grain rather than a single malt. As a single grain it’s quite interesting, although not entirely to my tastes (but it would be to others I’m sure). 82. 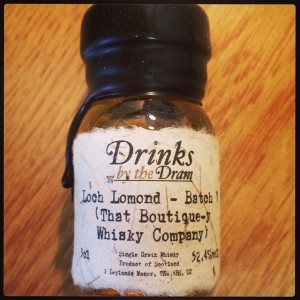 This entry was posted in Whisky. Bookmark the permalink.