Posted on 8 September 2014 by Steve Prentice 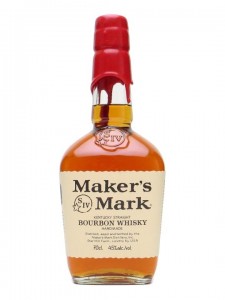 Info: Maker’s Mark is a ‘small-batch’ bourbon whisky that is distilled in Loretto, Kentucky, by Beam Suntory. It’s aged for around six years and is unusual in that no rye is used as part of the recipe. Instead red winter wheat is used, along with corn and malted barley.

Nose: When very first poured there’s a distinctly familiar nose to this, slightly Scotchy, the barley contect no doubt, and the wood. After a short while it opens up and the American nature beings to show, with the corn coming out much more strongly and sweetly.

Palate: Medium oils cover your mouth with a sweet spiced woodiness followed by the corn and other cereals that make up it’s recipe.

Thoughts: It tastes fairly premium, but isn’t a particularly premium price, a combination that you don’t find too often. I’ve never been a big fan of mash bills (recipes) that have much corn in them, so bourbon is often not my preferred tipple, but this is pleasant none the less.

Thanks to Maker’s Mark for the sample.

This entry was posted in Review, Whisky and tagged Maker's Mark. Bookmark the permalink.