Posted on 14 November 2013 by Steve Prentice

PR Bit: Burn Stewart Distillers have unveiled the new Black Bottle Scotch Whisky – a return to the original blend and bottle design. With 18 months of development the new Black Bottle see a return to the original Scotch, more in keeping with its original north east recipe which the Graham brothers created in Aberdeen at the turn of the 19th Century. The result is a curiously rich and slightly smoky taste that maintains the distinctiveness of Black Bottle but adds another layer of depth to the liquid. Black Bottle is presented in new packaging, abandoning the regular green glass whisky bottle and re-introducing the distinctive black glass bottle, which was the original inspiration behind the name of the brand. This iconic bottle was used until the outbreak of the First World War after which time it changed to a standard green glass bottle.

On to the review…

Palate: Fairly light mouthfeel (it’s 40% after all), but it’s got some good oiliness. It’s very smooth, a small pinch of spices which doesn’t come to much, but what comes through is a rich pungent drop of smoke amongst the rest of the rich fruitiness.

Finish: The spices are more evident here, they come along in waves along with more rich (but restrained) smoke and fruits. There’s enough wood to keep you happy, but it doesn’t linger to leave bitterness, in fact the whole dram is sweet, but balanced.

Thoughts: I seem to recall the old Black Bottle not being so dark in colour, not as rich; in fact it smelt quite young, fresh and malty – it was a good standard dram, but sometimes benefitted by adding a drop of something else to pep it up (Caol Ila worked really well). This is new, it’s richer, older feeling… The same family but definitely something new. It’s quite an amazing growing up, and if it’s a return to the original recipe (as then PR indicates) then it’s worked fantastically. Congrats to the makers, it’s nice to find a blend that really is quite different, although that’s what Black Bottle has always been known for I guess! There’s something increasingly familiar on the nose and palate, but unfortunately memory escapes me and I can’t put my finger on it. Either way, yummy. 85. Possibly higher considering the great value here, please go find a bottle to try! My lasting hope is that the makers keep up the quality after these first batches have sold.

If you’re looking to buy this online, ensure you’re buying the new bottle and not the old bottle which isn’t what I’ve reviewed here. The old bottle is still very widely on sale, and looks (and tastes) different.

Available from Royal Mile Whiskies for £19.95 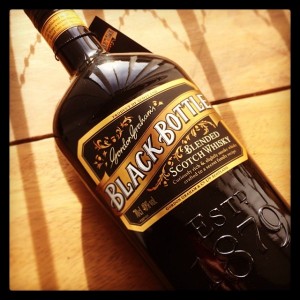 Thanks to Burn Stewart for the massive sample.

This entry was posted in PR, Review, Whisky and tagged Black Bottle. Bookmark the permalink.