Info: Oban in Gaelic means ‘little bay’, and this release forms a new member of the core family of Oban’s whiskies. It’s made from a range of different ages of whisky which have been matured in three types of casks… European oak ex-sherry casks, re-fill casks with new oak cask ends, and re-fill American oak hogsheads. These have then been combined and married in small oak casks for a short period of time to allow integration of flavours.
Colour: Orangey gold. Looks a little caramelly but who knows.
Nose: All sort of flavours; orange (and candied orange peel), spice, malt, caramel toffee, salt, smouldering hints of smoke, and touches of coffee grouts along with green apples and chocolate hints. In many respects, the regular house style of Oban, but a little mixed up.
Palate: The palate is slightly sweeter than expected, it’s easy with spices that start to build eventually. There’s smoky puffs around and orangey salted caramel toffee notes and at the back there’s sherried raisin fruits with newish oak tones and green apples with a small dollop of honey. A fairly lively whisky.
Finish: The newish oaky tones lead with a fairly long and sweet finish, gingery wood and malt lasting longer than the other flavours, with tannins lasting out at the end.
Thoughts: It’s a play around by two master blenders which I find quite enjoyable and easy to drink; it’s a nice addition to the Oban range as Diageo run through its various brands adding NAS variants to them all. Which brand next eh Lagavulin? (I’d say Cragganmore by the looks of hints on social media, but Lagavulin is also on the way.)
Available: Little Bay is currently only available in the USA, although wider global distribution is planned for later in 2015. Bottled at 43% ABV, RRP $75.

Thanks to the folks at Oban for the sample. 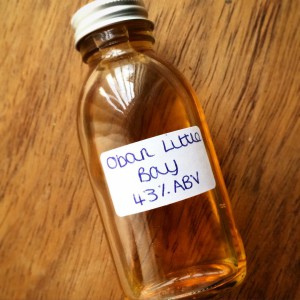 This entry was posted in Review, Whisky and tagged Oban. Bookmark the permalink.