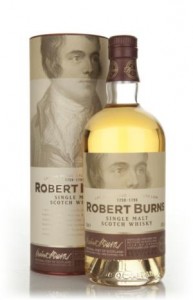 Ok, so I can often be guilty about blogging and reviewing unaffordable whiskies because I’m lucky enough to get a sample of something posh… It’s my whisky journey so still valid to blog about… but for your everyday whisky that’s actually affordable without breaking the bank and great to have on your shelf, I am sometimes guilty of not enough reviews and being caught up in the shiny shiny.

So let’s change that with a review of Robert Burns Malt from Isle of Arran Distillers which recently won a Silver award at this year’s International Wine and Spirits Competition. Here’s Arran’s text about this malt…

This is an official Arran Single Malt which has been endorsed by The World Robert Burns Federation. Made from approx 70% Bourbon Casks and 30% Sherry Casks, this light aromatic Single Malt is ideal for drinking, prior to or during a meal. Very fresh with no artificial colouring, this beautifully packaged malt is made for easy drinking.

On to my review…

Colour: Straw to light gold. Yippee, whisky with a natural colour, a good start!
Nose: Light; vanilla pods meets a small compote of winter stewed fruits in a large pot of custard. A very pleasant nose here, a pinch of spices and general good quality stuff. A nice oaky back note to the general proceedings.
Palate: A touch more spicy than I was expecting from the nose, but pleasantly so and quickly eases off. It’s a light summery mouthfeel, zingy and fun, gently floral and vanillery with some notes of more autumn fruits at the back leading on to the finish.
Finish: Being such a light early evening dram the finish is actually slightly longer than I was expecting, helped by the obviously good casks in use and the gentle autumn / winter fruits that sick around after the initial summer fruits fade away.
Thoughts: This is the only whisky produced by Arran that I’m aware of that’s chillfiltered. However that’s not always a bad thing (often in the eyes of whisky geeks, but not always), and in this case it allows a light summery dram to rear it’s head and allows for a little less ABV (which helps with lightness). It helps aim this dram exactly where Arran say they’ll aim it in the official notes above, a light pre meal style dram, and yet it still has plenty of quality and is under £30. Really you can’t go too wrong with that, and I like it, quite a lot! This dram isn’t supposed to blow your head off, but it’s well put together and has plenty of great flavour. I’d happily have a bottle on my shelf to share with friends while hiding my more expensive stuff away. 85.

Thanks to Arran for the miniature!
Available from Master Of Malt for £29.95. 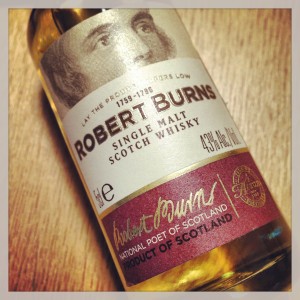 This entry was posted in Review, Whisky and tagged Arran. Bookmark the permalink.