Posted on 7 August 2013 by Steve Prentice 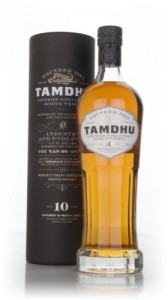 Tamdhu, a Speyside distillery, closed in 2010, was then sold and reopened in 2011. This 10yo released in April 2013 marks the return of the distillery into shops… and as an entry level malt it’s at a good price point.

Although a little late to the party with release tasting notes, I’ve finally caught up. Keep reading for some quick thoughts.

Colour: Gold with amber tints.
Nose: Really malty, gentle oaky wood and sweet autumn fruits with a sprinkle of nuts. A surprisingly relaxed, smooth and sumptuous nose. With some time becomes slightly perfumed and spirity.
Palate: Easy drinking and smooth, oily and light… There’s a small handful of spices which combine with autumn fruits, orange marmalade, and just a little rubber. The longer you leave this on your tongue the more the spices build.
Finish: The finish is longer than expected, with very slight cask sour rubbery notes coming forward amongst the sherry fruits which become stronger at the end.

Thoughts: The nose is slightly better than the palate, but for the price it’s a perfectly competent Speysider for a good nights session, it’s a great starting whisky. I would suggest this is chill filtered and contains some colouring, but at least not too much, mostly just for consistency I’d say. The whisky geek inside me thinks it’s a shame they didn’t go for a craft presentation, i.e. non chill filtered at 46% with no added colouring… that would give this dram a needed boost, thicker mouth coating oils would serve it well. However the more commercial minded bit of me does understand that this is being aimed at the mass market, they need to produce it at a good price point, and with that they’ve done well, this is a great entry level malt that would be worth while getting if you see it on the shelves of your local supermarket. Some people have described the bottle as retro and cool, for me it doesn’t do anything, but the low price maybe does. Also, Tamdhu deserve congrats for making this as a 10yo and not following the growing trend of NAS (no age statement). A bottle I’d happily keep on my shelf and share with visitors who aren’t major whisky geeks, it’d keep me and them happy. Low to mid 80’s in score.

Sample from Tamdhu.
Available at Master of Malt for £30.45 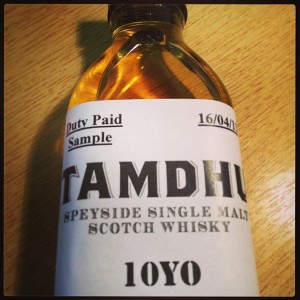 This entry was posted in Review, Whisky and tagged Tamdhu. Bookmark the permalink.