Posted on 27 November 2014 by Steve Prentice

First off, here’s some of the PR info before I get on to my tasting notes which you’ll find below…

Berry Bros. & Rudd Spirits is delighted to announce the release of Vintage Reserve from award-winning Speyside distillery, The Glenrothes. As with many single malts, the new expression carries no age statement but, in an unprecedented move, all the Vintages used in this single malt have been revealed.

Ronnie Cox, The Glenrothes Brand Heritage Director, states: “Unlike other malts that bottle by age, we choose whiskies that represent the best of a particular year and marry them together when they are ready. Whisky enthusiasts want to know what they are buying and, as ever, we are happy to oblige by being open and transparent about the 10 Vintages assembled together for Vintage Reserve, our most complex Reserve to date.”

Right, let’s move on to my tasting notes…

Nose: The nose is fairly rich, there’s younger grassy and barley malt notes, but there’s also rich mellow sherry notes too. As you warm it up quite a spirit nose comes from it, followed by gentle oaks, honey and cracked nuts. You can tell that it’s multi vintage.
Palate: It’s 40% so it’s not the thickest mouthfeel, but there are some thicker oils to be found from some of the sherry which bulk things up. There’s grassy spices and honey.
Finish: The finish is longer than you might expect – the older malts helping here I guess. It’s sweet and sour in one; sweet from the sherry fruits, but sour from wood tannins.
Thoughts: Described as “an unprecedented move” by revealing all the vintages that make it up, although I can think of two other brands that have done similar before now. Not that it matters, if NAS is going to be more of a thing, then letting us geeks know what’s in the makeup of it it really helps to win over friends, and Glenrothes is to be congratulated that they’ve done this. The dram is very much a Glenrothes. Early to mid 80’s in score.
Available: Out in Taiwan any time now, and coming to the rest of the world next year.

Thanks to The Glenrothes for the large sample. 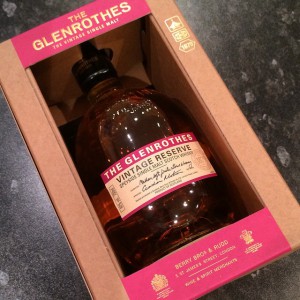 This entry was posted in Review, Whisky and tagged Glenrothes. Bookmark the permalink.