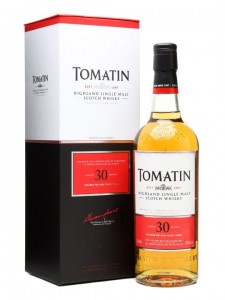 Tonight I’m blind tasting a Tomatin whisky. Strength, under 50%, so I’ll vote 46%, it’s peppery with a slight bite, that’d fit with that ABV. Colour is a light to medium gold, indicating bourbon maturation, and the nose seems to match that thought. It’s light & fruity, delightful! On the palate it’s got a full to medium oily mouthfeel, non chill filtered fits the bill. Sweet but full oak notes, plenty of bourbon, not quite the pure bourbon of the 25yo that I love, it’s that bit more fruity and juicy. It seems oldish, it’s smooth with a peppery ginger spice to it and a long fulfilling fruity finish. Yummy stuff! At a guess I’d say this is the 30yo [and it was!].

This is an excellent dram; for a pretty old whisky it’s full of life, it’s zingy and young in nature, sprightly some would say, although obviously behind the fun it’s a hugely well crafted and old gent of a whisky, it’s a bloke in his 50’s who’s brought an amazing new suit, got on a motorbike with it on and headed off to the beach and into the sunset. So cool.

Well priced, although I do lament the passing of the 25yo which was around £50 cheaper. However for 30yo, it’s still very well priced compared almost anything else around.

Limited to 2000 bottles a year, the Tomatin 30year old was initially matured in bourbon hogsheads before being finished for over three years in Oloroso sherry butts.

Currently available at various places online including Arkwrights for £126 and The Whisky Exchange for £131.