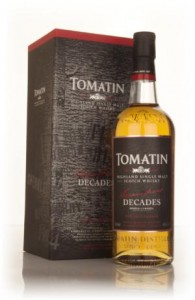 Tomatin created this special edition whisky to celebrate their (then) Master Distiller, Douglas Campbell MBE’s 50th year with the distillery and uses casks from each decade that have been selected by the man himself to create a unique single malt…. With 50 years of whisky to choose from you know it will be good!

Let’s crack on with the review…

Nose: Lovely, light delicate Tomatin zing, with more depth and complexity than some others in the range due to the range of casks used to create this dram. There’s the light citrus fruits / grapefruit note that’s often there in a Tomatin but there’s also lashings of whipped cream, vanilla pods, gentle woods, jelly sweets (Rowntree’s Randoms) and just a tickle of smoke. Lush! Although it contains some well-aged malt, it keeps a youthful zingy nose.

Palate: On the palate it follows on well from the nose, but at full throttle, it’s jam packed with flavour. Mouthfeel is fairly light but also well-rounded and smooth, there’s a slight spicy peppery kick on your tongue which is enjoyable and allows the flavours to run riot… Citrus fruits, cask oaks, fizzy sherbety smoke.

Finish: The finish embraces your chest with a warm hug, giving you an indication of the older malts in here, but the younger malt sticks around for a good while longer than I expected. At the tail end old oak notes kick in to let you know again that there’s some good age contained within.

Water isn’t really needed, but a wee drop opens up a few more smoky notes (and this does apparently contain some rare, to the UK anyway at the time of this review, peated malt). It tones down the ‘pow’ of flavours in the mouth, that’s neither good nor bad, it’s different, it’s an alternative slightly smoother dram which still delivers fresh bourbon tones and a fizzy finish. My tip, only use a very small drop of water, it’ll drown fairly fast, you don’t want to kill off the old whiskies in here!

It’s a great expression with a good back story and produced / marketed really well with regards to the box and description of what’s gone into the mix, others should take note. Well done Tomatin! Quite limited amounts left now but worth getting a bottle if you spot one while it’s around at a reasonable price. 90+ in score.

As I write this it’s one of the hottest days in what seems like many years, and my default is to go for a nice cold cider or a beer, it’s hard to imagine having a refreshing dram that’s great for summer. However this particular dram does manage to fit the bill somewhat, while it’s got the depth that would allow it to stand up happily in the midst of a winters evening, it’s also got plenty of light zestiness that makes it plenty drinkable on a summers eve, and that pleased me greatly!

Ralfy, one of my favourite vloggers gives Decades a great video blog over on YouTube, better than anything I can write, so I’ll shut up now… Check it out here!

Sample purchased from http://whiskysamples.eu/
Bottle available (and will soon be purchased!) from Master Of Malt, £62.86.
Or from the Green Welly Stop for £61.70.