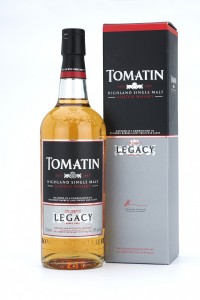 Light gold to yellow in colour; Tomatin do use caramel colouring, but it has been used fairly sparingly here to help maintain consistently. The casks used include virgin oak and Bourbon, which you would expect to give quite a light colour anyway, although saying that this is much darker than the Bourbon only matured 15yo, and very much the same colour as the 12yo sherry matured.

Often the nose on Tomatin whisky is fairly identifiable, good distillery character with a great what I call ‘modern’ note to it, usually vibrant and a little exotic with grapefruit and pineapples notes.

The nose on Legacy is a slight departure from this, it’s just slightly less instantly identifiable as Tomatin, although within a minute or two in the glass you’ll soon be able to compare it to the 12yo, albeit less fruity due to not having any sherry involvement. Legacy’s nose is a little spirity, young beefy malt and quite woody, fresh pine notes are pushing quite hard, but held in check by the bourbon. Some doughy, cakey notes too.

The mouthfeel is fairly light to medium*, and similarly light and easy on the palate, the abv is at a level that makes this easy drinking, but high enough to combine with the virgin oak to give a nice little peppery kick. If you hold the whisky on your tongue for a while you can easily detect sweet malty barley notes which is nice (and maybe hints to some quite young whisky in use).

The finish is longer than you may think it would be, with a nice warmth on your chest and leaves fresh, sweet malty and oaky flavours behind in your mouth.

This is certainly a new expression from Tomatin and not just a small tweak to similar products in the line, it’s a slight departure from what I had expected. It’s different, but it’s still good, and for the price it represents an interesting session whisky that you don’t have to worry about being precious about, and sometimes that’s just what you need.

I’ve not tried with water, I don’t think it needs any. However if you’re someone who likes ice in your dram, then I suspect this will take ice really rather well… And I doubt it’ll go cloudy either!* I could imagine this will make a nice summer dram on a hot evening with a drop of ice.

For me, and my memories may be fading here, I would suggest a slight parallel between this dram and Glenmorangie’s Ealanta, different drams yes, but parallels for sure (due to the virgin oak obviously, this dram being more accessible both price and palate wise however).

If I were asked the question of would I buy this, or the 12yo, I’d squirm a little… but for the extra £2 I’d possibly plump for the 12yo sherry finished, it’s that bit sweeter. That’s not to say there’s anything at all wrong with Legacy, it proves to be a really interesting dram with it’s more malty and piney notes, it’s certainly worth a try.

Some other bits of info you may find interesting… Tomatin has its own onsite cooperage which looks after all the maturing casks… and everything Tomatin produces is matured on its site. Vatting/blending of the whisky is done onsite and then tankered off to the Central Belt for bottling. Legacy was in creation from near the end of 2012 and released in March 2013.

* i.e. the whisky is chillfiltered to remove oils that go cloudy when cold, this leads to a lighter mouthfeel. 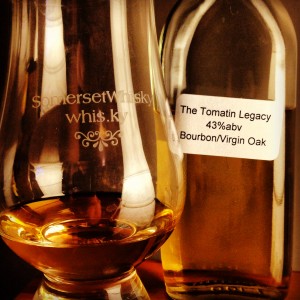